Robert Drysdale has been taking plenty of heat, for not calling Max Rohskopf's bout at UFC Vegas 3. But following all the outcry, the fighter is defending his coach.

Ever since UFC Vegas 3 went down, Robert Drysdale has been sharply criticized by some, for not calling Max Rohskopf’s fight. Even though the fighter repeatedly said he was done.

Well, now the prospect has come out and rallied to the defense of the coach and renowned grappler. 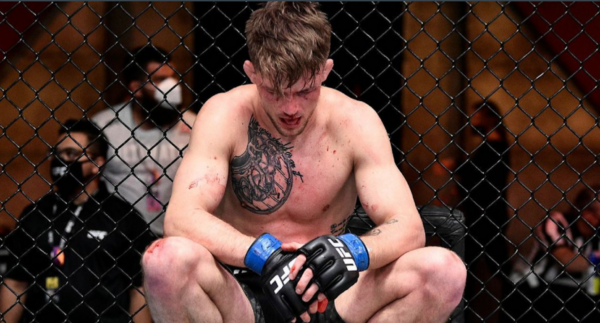 Rohskopf got the call, on short-notice, to fight Austin Hubbard at UFC Vegas 3 last weekend. Early on, Rohskopf threatened with submission attempts, but as the fight wore on, he fatigued and absorbed numerous shots. After round two, the bloodied fighter could be heard telling his coach, Robert Drysdale, he didn’t want to continue.

Drysdale, however, repeatedly encouraged Rohskopf to keep fighting. It wasn’t until the fighter told a commission inspector he wanted it called off, that the bout was halted.

Well, due to what transpired, Drysdale has come under fire from some observers. But, in a follow-up interview with MMA Fighting, Rohskopf said this about his coach.

“If the commission wasn’t there, he would’ve got me back I think,” Rohskopf said. “I would’ve went out there and we wouldn’t be having this conversation.

The man f*ckin gave me a place to live when I needed somewhere to live, so I didn’t have to live in my f**kin’ car.

“I actually didn’t want anything to do with MMA until I knocked on his door and was like, ‘Hey, man. I need help and I want you to coach me.’ He’s done nothing but be there for me and do everything he can for me. So for people to come out and say that he was wrong in that situation, there’s literally no debate or discussion about it.

“There’s really no discussion about it. Rob did the right thing and he’s always done right by me.”

Following the incident, Drysdale has also defended his actions, and he’s argued he was just doing his job. The veteran fighter has also said he would have stopped the fight, if he thought Rohskopf was hurt.

So, it will be interesting to see if Rohskopf’s comments here deflects any of the heat Drysdale’s been taking. For people who believe it wasn’t a good look for the sport, the comments probably won’t change their mind.

Rohskopf says Hubbard should be getting more attention

The 25-year-old also noted that he believes more attention should be focused on what Hubbard did in the fight, rather than how it ended.

“I think that it’s absolutely disgusting that people aren’t talking about Austin and his performance,” Rohskopf said. “His back was against the wall.

If I would’ve went out there and beat him, he would’ve been 1-3 in the UFC, which wouldn’t have looked good. No one should be f**kin’ talking about me, they should be talking about Austin and his performance.

“If anything, they should be hyping him up more that he beat a dude that had a lot of hype. And maybe that’s all that it is, just hype.”

There you have it. Do you think the UFC will have Rohskopf back in the Octagon anytime soon?