Alistair Overeem was dropped and bloodied in the first round of his bout with Walt Harris. But, the decorated heavyweight came roaring back to score yet another, stoppage win.

It wasn’t looking good for Alistair Overeem early on into the UFC Florida headliner. But, the veteran fighter survived the early storm from Walt Harris and finished the dangerous heavyweight. 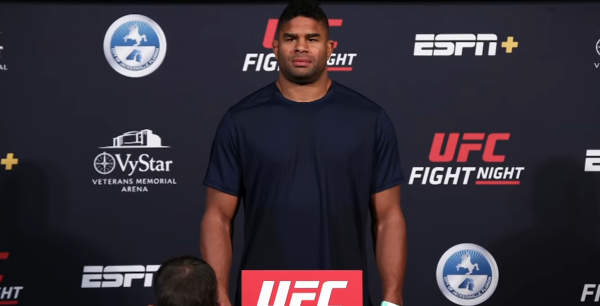 Harris came out pressuring to begin the bout. Overeem scored with a spinning kick to the body. Moments later, Harris tagged Overeem with a flurry that sent him to the floor. Harris continued to fire down shots from above but Overeem managed to survive. The veteran got back to his feet and Overeem was cut above his left eye.

Harris charged in, but in the ensuing scramble, Overeem took the top position on the floor. Harris gave up his back and Overeem landed some punches from behind. Harris worked his way to face Overeem, but the latter continued to land lefts from the top. Late in the round, Overeem landed a couple of hard knees.

The action slowed in round two, not surprisingly, following the frantic pace in round one. Around 90 seconds in, however, Overeem stunned Harris with a headkick that sent him to the floor. Overeem fired in shots from above with Harris giving up his back. Overeem sunk in his hooks and flattened Harris out. Overeem continued to land shots from above and you could hear Harris grunting badly. Finally, after Overeem landed repeated punches from above, the fight was stopped.

The heavyweights proceed to have a moment, likely on account of the fact Harris tragically lost his step-daughter not long ago.

Here are the complete results for UFC Florida.