Welcome to our live coverage of UFC 249 featuring a bout between Tony Ferguson and Justin Gaethje for the interim lightweight title. 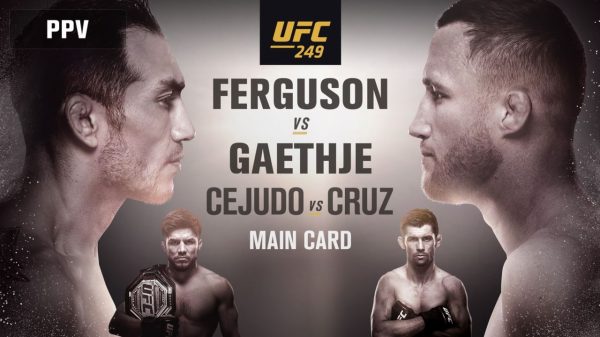 Man, it feels good to have live fights again after nearly two months away. Credit the UFC for making this happen for everyone to enjoy.

Spann goes right on the attack, landing some quick strikes and scoring with a takedown. Alvey, though, battles back to his feet with ease.

Nice second takedown for Spann scores and he is working for an arm-triangle submission. Alvey is in a bad position as Spann continues to tighten the submission. But Alvey shows his experience, remains calm and gets out.

Nice exchanges by Alvey and Spann in the second. Alvey has done some damage to the lead-leg with his low kicks. In the final moments, Spann finds his target and unloads, just missing a big kick.

Spann with a big head-kick, following up with several punches against the fence. Alvey, though, showed his toughness and remains upright and in this one. Alvey with a right-hook and he has Spann hurt.

Alvey worked quickly for a submission, locking in a front-choke with under a minute to go. He had to let it go, though, as they battle to the feet. Alvey closed with an incredible flurry but did not get the finish. We’ll go to the scorecards for this one.

Quick takedown for Mitchell and he goes for a submission moments in. He’s got Rosa stuck and on his back. Mitchell working to better his position, moving into the mount but Rosa slips out for now.

It looked like Rosa was just about to tap before he found an opening there. Now Rosa nearly secures his own submission before Mitchell gaining back control. Mitchell working for a twister submission.

So fun listening to Daniel Cormier and Joe Rogan go back-and-forth with the announce team. Both are so insightful and you can tell just how much of a “fan” they are of the sport. Makes it so much more enjoyable to listen to.

Mitchell again showing his abilities, taking Rosa down and working for the submission again in the second. Nothing for Rosa so far almost 10 minutes into this featherweight bout as Mitchell is completely dominating.

The second round ends with Mitchell locking in another twister attempt. And the third begins in the same with Rosa locked up in the twister yet again.

Coverage of the next round of prelims continues on the following page.