Although Francis Ngannou came up short in his bout with Stipe Miocic, the heavyweight contender believes he'd have a tougher time getting past Daniel Cormier.

There’s a good chance Daniel Cormier and Francis Ngannou won’t end up fighting, before “DC” hangs up the gloves. But, if they do fight sometime this year, Ngannou believes Cormier will provide a tougher test than Stipe Miocic.

Yes, even though the heavyweight contender was defeated by Miocic when they battled in 2018. 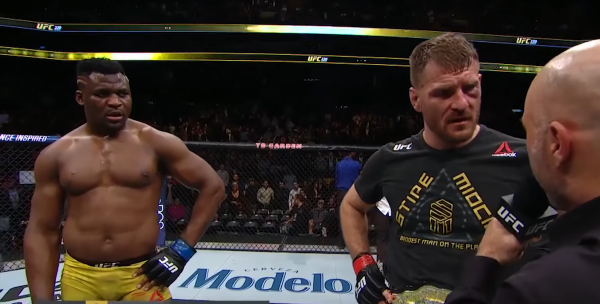 Ngannou thinks Cormier’s a “bigger challenge” than the champ

The expectation has been that Cormier will fight Miocic for a third time, sometime this year. The UFC was hoping to book the trilogy fight this summer.

But, since Miocic is a fireman and paramedic, the champ’s said that takes priority over fighting in the midst of the coronavirus pandemic. Further, Miocic has been unable to train in Ohio, due to the pandemic.

Well, because of the above, it’s not clear yet when the champ will fight again. Since Cormier plans to retire before the year is up, the former champ’s been getting frustrated with the fact the trilogy fight hasn’t been booked.

More recently, Cormier said that if Miocic is not available to fight, he’s willing to face Ngannou for a vacated belt.So, while talking to BJ Penn.com recently, Ngannou was asked to weigh-in on what he thinks would be a tough fight: a rematch with Miocic, or a scrap with Cormier.

“Honestly, I am more confident in a rematch against Stipe than I am to fight Cormier. I think Cormier is a bigger challenge for me than Stipe,” Ngannou said.

I think if I fight Stipe again, I’ll have more knowledge and how to beat him.”

Ngannou does make some interesting points. Since he’s faced Miocic before, it stands to reason that he’d be able to build on that fight and come up with a better strategy to win the rematch. It’s also interesting to hear that Ngannou thinks Cormier is a better finisher than the champ.

Unlike Miocic, Cormier would give up a lot of size to Ngannou. But, evidently “The Predator” doesn’t think that would play a key role in the bout.

Ngannou wants the division to move on

Before Ngannou ran through Jairzinho Rozenstruik at UFC 249 earlier this month, he had called on the UFC to make that bout for an interim title fight. That didn’t happen, and Ngannou still believes the heavyweight title picture needs to get moving.

“I think the UFC needs to do something and make a title fight happen. I don’t know when the pandemic will end. No disrespect to Stipe because he’s a well-deserved champion but the division needs to move on,” Ngannou said.

“The division can’t be held down any longer. Whatever it takes, and whatever the UFC has to do to make the division move on has to be done.

So, we’ll see what happens. If Miocic does commit to say, fighting Cormier in September soon, the UFC will likely proceed with those plans.

If he doesn’t, then who knows? Maybe we’ll see Cormier – Ngannou after all.

Dana White Believes Conor McGregor Could Return to UFC in 2021