Paige VanZant Outlines Plans For Fighting Out UFC Contract, Undergoing Yet Another Surgery

Paige VanZant has let it be known that he intends to test free agency when her UFC deal is up, and recently the star provided an update on her plans, following the news she needs arm surgery again.

Paige VanZant has revealed she needs to have surgery on her arm yet again. But “12 Gauge” is hoping to get a fight in before that happens. 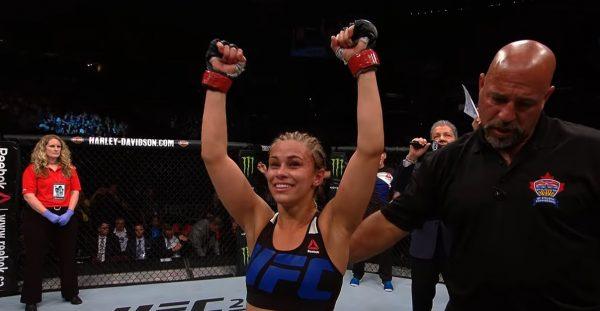 For sometime, VanZant has been saying that she plans to test the free agent waters, when she fights out her current UFC deal. But, the star has been sidelined due to ongoing issues with her arm, which she’s broke several times.

Well, recently MMA Fighting spoke with VanZant, and while talking about her upcoming plans, “12 Gauge” said this.

“The timeline is fight one more time [and] I’ll be in contract negotiations at that point,” VanZant said. “I’ll be a free agent.

Theoretically that could take a long time to go through that negotiation process. So it’s the perfect time to have one more arm surgery and heal it the right way.

“By the time negotiations are over, I’ll have a new contract. I’ll [have] a fight lined up. All of that will give me plenty of time to heal my arm correctly.”

So, it will be interesting to see when and who VanZant fights. In terms of her testing free agency, although VanZant has gone 2-2 in her last 5 bouts, win or lose, she’s going to command a lot of interest.

Not only is VanZant an entertaining fighter, she’s built a sizeable platform on social media and has a mainstream audience via her participation on “Dancing With The Stars”.

VanZant details the issues with her arm

And while talking about the extensive issues she’s had with her arm, and why they’ve persisted, VanZant reported this.

‘So the biggest problem is I need to get the plate out in my arm,” VanZant revealed. “Tony Ferguson broke his ulna, too, and he had his plate taken out, so that’s why he hasn’t had any complications with it.

I have a plate that pretty much runs from my wrist to my elbow, and each one of those has a screw hole, so I have seven screws in my arm.

“Each one of those screw holes is technically a hole in your bone, so they’re all weak points. Then at the front of your plate and at the end of your plate is a weak point, too.

Because your bone flexes, and it bends whereas the plate doesn’t bend, your arm bends around the plate. Each time I’ve re-broken it, I’ve broken through a screw hole.

I just need to get the plate taken out, so it’s just another surgery I have to look forward to.”

Here’s hoping VanZant (8-4) emerges from her next bout unscathed and that her next surgery goes well. Will the UFC resign her? Or could we see VanZant move to Bellator, where her husband Austin Vanderford competes?