It remains to be seen if Joe Rogan will be on hand at UFC 249, but recently he commented on the promotion's plan to proceed with the card, in the midst of the coronavirus pandemic.

Joe Rogan hasn’t ruled out calling UFC 249, since it was announced the April 18th card is taking place. But, the veteran commentator and comedian did raise some questions about the UFC’s plans for the event, as the coronavirus pandemic continues. 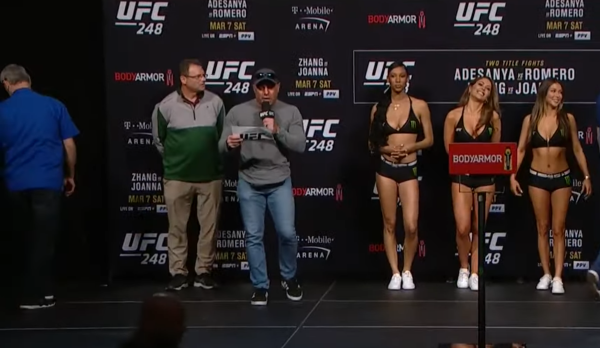 Rogan notes there’s “no social distancing” in a cage fight

Not long ago, Rogan said he would not be heading to UFC 249 to call the card, if it took place. But, after the promotion announced the card is going down (it’s believed to be taking place close to Lemoore, California), Dana White said Rogan would be at the event.

During a recent episode of Rogan’s podcast, however, the accomplished martial artists made the following comments about the event (quotes via MMA Fighting).

“There’s no social distancing in a f*cking cage fight,” Rogan said. “They’re on top of each other sweating in each other’s mouths.

“What if one of those guys test positive? What if Justin Gaethje tests positive? He’s supposed to be fighting Ferguson. . . I have a feeling that if someone did test positive, they would kick them off the card.

I shouldn’t say kick them off the card, remove them from the card. I would imagine it has to be the right thing to do. Then you would also have to quarantine the people that worked with him in training camp and test everybody.”

Others have also questioned what the UFC will do if fighters show up for the card, and test positive for the virus (assuming fighters etc are tested for it).

Another key question others have raised, is where and or how fighters will receive medical attention if they’re injured in a bout. The concern being that medical facilities might be already at capacity due to the pandemic.

White, has insisted the UFC has plans in place to address all of this. But no details have been announced yet.

Rogan comments on Ferguson vs. Gaethje

Due to a travel ban that’s been enacted in Russia, on account of the pandemic, Khabib Nurmagomedov had to withdraw from the original, UFC 249 headliner. So, while talking about the fact Nurmagomedov vs. Ferguson has been canceled for a fifth time now, Rogan said this.

In a sport that’s violent – it’s an inherently violent sport – he stands out as the most violent. Do you know how crazy that is?

You watch his knockout of Edson Barboza, you watch how that motherf*cker attacks people; there’s a reckless abandon to his calculated wildness that is terrifying. It’s terrifying. He’s something special and he’s better all the time.”

Can Gaethje score the upset? In a short-notice bout with next to no training camp?