Following the news that Tony Ferguson and Justin Gaethje are going to throw down at UFC 249, the card's new official poster has dropped.

On Monday the UFC announced that Justin Gaethje and Tony Ferguson are going to battle for an interim lightweight title at UFC 249, and the card’s new official poster has been released.

You can check out the card’s new poster below. 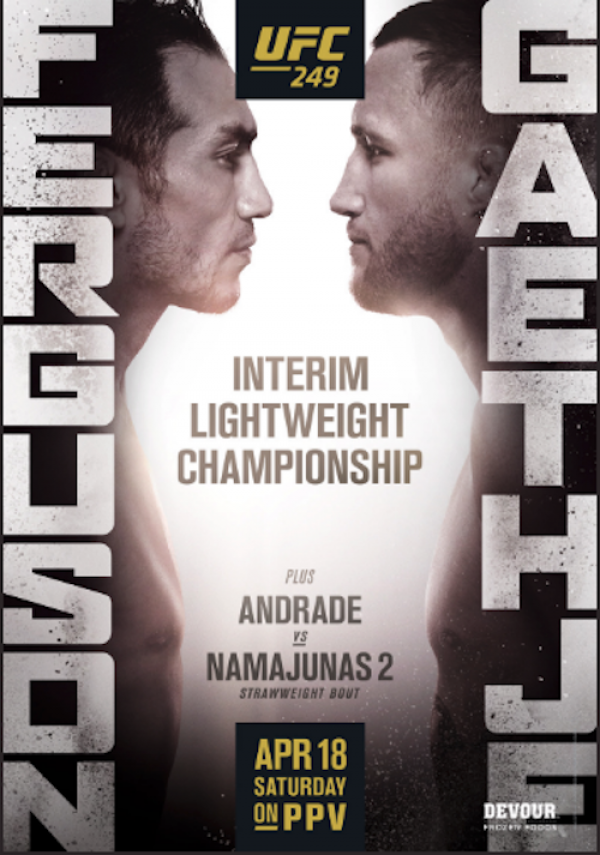 Ferguson (25-3) heads into the April 18th card having won 12 straight. In “El Cucuy’s” last outing, in June, he scored a TKO win over Donald Cerrone (via doctor stoppage).

Gaethje (21-2) is riding a three-fight winning streak. In his last outing, in September, the former WSOF champ took out Cerrone in the opening round.

Originally, UFC 249 was supposed to feature a highly anticipated bout between lightweight champ Khabib Nurmagomedov and Ferguson. But, due travel bans that have been enacted, because of the coronavirus pandemic, Nurmagomedov is stranded in Russia.

Here is the complete line-up for the revamped, UFC 249 card. The card’s location has yet to be announced, but recently it’s been reported the event will take take place at the Tachi Palace Resort and Casino in California.