Henry Cejudo has added Alexander Volkanovski to his call-out list, and recently the featherweight champ had some harsh words for "Triple C".

Right now, the plan is to have Henry Cejudo fight Dominick Cruz next, but the bantamweight champ has also been driving for a bout with featherweight king, Alexander Volkanovski. While the latter says he’d be more than willing to throw hands with Cejudo, Volkanovski also had some fiery advice for the decorated fighter. 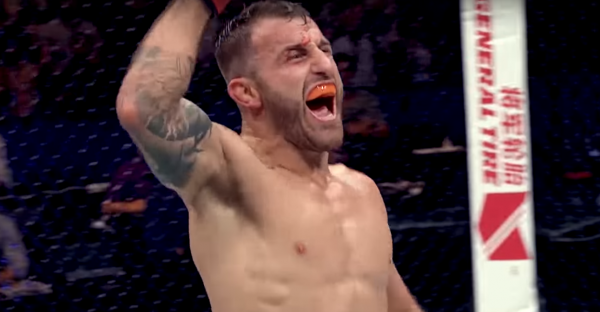 Volkanovski on why Cejudo is “embarrassing”

In 2019, Cejudo continued to establish himself as one of the world’s best fighters, by defeating Marlon Moraes to win the bantamweight title.

But, after the now former flyweight champ won that belt, he called for fights with veteran stars like Urijah Faber, Cruz, Frankie Edgar and eventually Jose Aldo. Cejudo didn’t drive for bouts with rising contenders like Petr Yan or Aljamain Sterling.

Well, more recently Cejudo has also been calling for a fight with Volkanovski, which is why the latter recently told MMA Junkie this.

“It seems like he’s challenging everyone but his No. 1 contenders, so whatever. Look: I think, good on him.

If you’re calling me out, all right. But I still think he should be focusing on his division and his No. 1 contenders.

It literally looks like he’s getting everyone but the No. 1 contenders, and that’s something that I find – I think that’s just embarrassing. I really do believe that.

“I think it is cringey, living up to his name when he’s doing them sorts of things. But again, I wouldn’t mind shutting his mouth up, to be quite honest.

But right now, I’ve got a division that I want to hold. And again, he’s just trying to hold onto that bantamweight belt.

So if he moves up, he knows I’ll kick his ass, but he’ll still get to hang onto that bantamweight belt a bit longer. If he’s going to be like that, I don’t think he deserves that chance. But you never know.”

The Australian star also had this warning for Cejudo as well.

“If he keeps running his mouth and no one else is ready for a fight, and that’s what fight’s in front of me, I think I’ll do the world a big favor by shutting him up.”

Of course, it would be fascinating to see if Cejudo could make history by winning a third UFC championship at 145 pounds. But, it probably won’t happen anytime soon.

If Cejudo beats Cruz (if that fight happens on May 9th), the likes of Sterling, Yan and Cory Sandhagen are waiting in the wings. But, if the champs hold their bouts for say, another two fights, don’t be surprised if the UFC looks at Cejudo vs. Volkanovski.