Anderson Silva's son, Gabriel, is off and running in his kickboxing career, as the 22 year-old won two titles this past weekend.

It remains to be seen how far Gabriel Silva intends to take his combat sports career. But, the son of the legendary Anderson Silva already has won a couple of kickboxing titles, following his amateur debut last year. 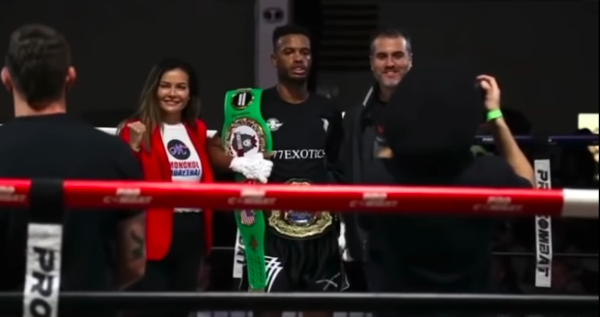 Silva faced Christian Williams this past weekend at a kickboxing event in Seal Beach, California. As you can see by watching the video below, Silva weathered some nice attacks from Williams early on and proceeded to pick apart his opponent.

With the victory, Silva moved his kickboxing record to 5-0, and he won the ISK southern California middleweight and the FightersRep 165-pound belts.

Is Silva thinking about moving to MMA?

Due to what his father has accomplished in MMA, of course, Silva is going to be asked about whether he intends to make a move to the cage. But, when asked about that possibility by MMA Fighting, Silva said he has no plans to crossover to MMA right now.

The 6’3 tall fighter also said this:

“I don’t see it like, ‘Oh, because my dad was the best in UFC history I have to go there as well,’” Silva said. “In my head, I want to go there because the best athletes in the world are in the UFC. You want to shine and prove yourself among the best. That’s the goal in the UFC.”

“…My dad built his history, and now I have to build mine.”

There you have it. There’s no question that if Gabriel does move into MMA the coverage and pressure will be massive. Case in point, here we are sharing out video of his kickboxing match.

Conor McGregor Says Dustin Poirier Rematch “is On” For January 23