Although Johnny Walker's stock as a rising star took another hit recently at UFC Brasilia, the light-heavyweight's outlined why he's still in good spirits.

Johnny Walker was unable to get back on track at UFC Brasilia, and as a result, the hype train that was following him not long ago has slowed down a fair bit. But, recently the Brazilian fighter explained why he’s still “happy”, despite the fact he was defeated by Nikita Krylov earlier this month. 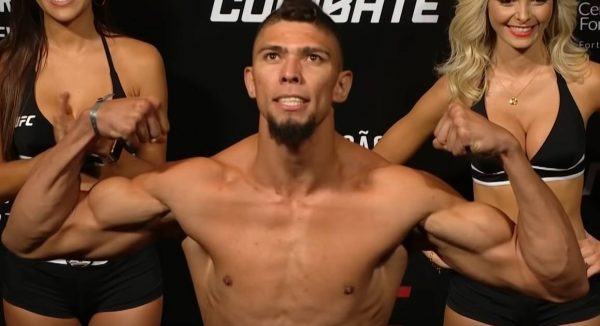 It wasn’t long ago when many people were talking about Walker challenging Jon Jones, on account of the light-heavyweight’s run in the UFC. After making his way to the promotion via Dana White’s Contender Series in 2018, Walker proceeded to take out his next three opponents in under three minutes, total.

But, last November, Walker took on fellow contender Corey Anderson, and was stopped in the opening round. Then, at UFC Brasilia earlier this month, Walker was out wrestled and out grappled by Krylov, and lost via decision.

Well, since then, Walker spoke with MMA Fighting. While discussing the defeat, the charismatic fighter talked about the positives he’s taken out of the fight.

“I’m happy – I fought three rounds,” Walked said. “It was good for me. Fighting three rounds in the biggest promotion in the world, at UFC level, was great for me. That helped me evolve as an athlete and see where I need to work on.”

And, while discussing the fact he spent time training for the bout at the famed, Tristar Gym in Montreal, Walker stated:

“Firas (Zahabi) has a lot to teach me; I have a lot to learn and evolve with him,” Walker said. “I’ll get back there, train and come back much stronger.

“I’m 27 and got in the UFC a little over a year ago, so it’s just the beginning for me. It’s all experience. It’s all very new for me. I have a lot to learn. I still know nothing. (This fight) taught me a lot, so I’m happy. I gave my best, fought hard, gained experience and will come back stronger next time.”

Now, on one hand, it’s good to see that Walker’s keeping his head up. After all, there’s no question that he’s ridiculously athletic and dangerous, and at 27, he still has plenty of time to improve his game.

But, at the end of the day, Walker did incur another defeat. So, until Walker puts together another run, questions about his ability to be a championship contender will likely remain.

Walker insists he has good cardio

One of the story lines to emerge from the loss was that Walker appeared to gas pretty early in the fight. While reflecting on that aspect of the bout, Walker said this:

“He put a lot of pressure, I even defended some takedowns, but I don’t know what happened because I got tired,” Walker said. “I have good cardio. I don’t know what happened…if it was the weather. I don’t want to give excuses, but I got tired. I train a lot. I don’t go out partying, I do the right diet. When I’m in camp and go from home to the gym and back. So it’s about training more.

Walker and his team will definitely need to figure out ways to build up his gas tank. As you know future opponents will be very aware of what transpired in his loss to Krylov, and will be looking to test his endurance.