UFC Brasilia: Kevin Lee Says we May Not See Him Fight For a “Few Years”, Following Loss

Following his setbacks this weekend at UFC Brasilia, Kevin Lee is reporting that it could be a while before we see the fighter compete again.

Kevin Lee was hoping to take out Charles Oliveira at UFC Brasilia and springboard back into title contention at 155. But, following Lee’s submission loss to dangerous lightweight, “The Motown Phenom” is reporting it could be a while before we see him back in the Octagon again. 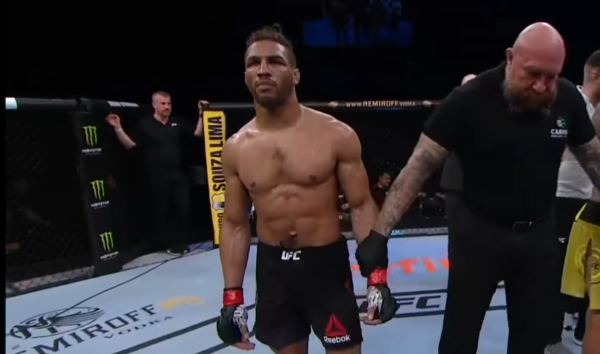 Lee was tapped to face Oliveira in the card’s co-headliner, after he bombed out Gregor Gillespie in devastating fashion last November. Oliveira hit Lee with some hard shots early on, but the well rounded fighter started turning to his wrestling. Although “do Bronx” kept Lee on the defensive with various submission attempts, Lee appeared to be turning around the fight.

But, not long into round three, Lee telegraphed a takedown somewhat and was countered with a fight ending, guillotine choke. The loss was the second setback for Lee over the weekend, as he also missed weight for the contest.

Well, while speaking to the media after the fight, a clearly, disappointed Lee said this (quotes via MMA Fighting):

“I got choked,” Lee said about the finish. “I think the fight was going good. I just got choked. I really can’t put it on nothing else but that.”

“I think lightweight’s still my home. I’ve just got to fine tune some things. But I’m going to take a long time,” Lee explained. “I kind of rushed into this fight. It will probably be a good minute before y’all see me again.

“I think I’ve got to evaluate some things. I feel like my camp was great. My coaches told me all the right things to do. I abandoned it. It’s all on me on this one. It’s going to be maybe a few years or so.”

“A lot more jiu-jitsu for sure,” Lee said about his plans during the time off. “I keep losing fights by choke and these guys ain’t even choking me. I’m getting choked.”

So, there’s a couple of things to discuss here. Might it be a good idea for Lee to take some time and shore up on certain aspects of his game? Specifically his jiu-jitsu? If Lee thinks that’s best, then probably. After all, three of his last four losses have been via submission.

But, will it really be a few years before we see the 27 year-old fight again? That seems unlikely. Lee was emotional when he made that statement, and he almost seemed to acknowledge that a bit. Lee’s submission losses have come against pretty nasty grapplers in Tony Ferguson, Rafael dos Anjos and now Oliveira. At UFC Brasilia, he also defended multiple submission attempts from “do Bronx”, so it’s not like his ground game is subpar. Far from it.