After having his latest winning streak snapped by Gilbert Burns last night at UFC Brasilia, Demian Maia reported that his storied career will very likely, wrap up soon.

Demian Maia has reported in recent months that his career is winding down, but on account of his latest run, some wondered whether the legendary grappler might post-pone retirement. But, following his stoppage loss to Gilbert Burns last night at UFC Brasilia, the 42-year-old confirmed that he’ll likely hang-up-the-gloves in the not too distant future. 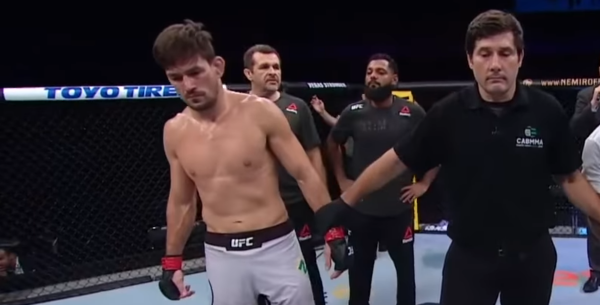 Maia faced Burns in the co-headliner of Saturday’s event, and early on, he was able to take Burns down. But, the latter, who is also a highly credentialed, jiu-jitsu competitor, survived Maia’s top game. After Burns got back to his feet, he floored Maia with a left and brought about the stoppage with follow-up shots. Maia never looked to be out-out, which is why he said the following after the event (quotes via MMA Junkie):

“Unfortunately, the referee stopped it – I thought I could go a little bit more, but it is what it is,” Maia said. “I feel I was OK. I felt I was OK, but you don’t know. The referee said that he thought I was out, and that’s OK – that’s the sport. I was feeling good, I was getting good in the jiu-jitsu positions, but he got me well with that hook.”

You can understand why Maia feels this way, and he’s certainly not someone who’s been known to make excuses for losses. But, chances are Burns would have scored with some more punishing shots, if the fight hadn’t been stopped.

And, while discussing a timeline for his retirement, the renowned grappler said this:

“I’ll come back to training and do one more fight then that’s it,” Maia said. “I want to do one more then probably retire. Tonight I was feeling pretty good. I feel I was getting my good positions, but respect. He defended well, he’s a great jiu-jitsu fighter, but he got me with the hook and that happens. That happens in this sport with the small gloves and that’s it. The referee didn’t help too much, but no excuse. He did well and he deserves (the victory).”

After his win, Burns floated the idea of an Anderson Silva – Maia rematch, which is an interesting, albeit, somewhat surprising idea. Maia faced Silva back in 2010, during his reign as the middleweight champ, but the fight was widely panned since it didn’t feature much in the way of entertaining action. So, it would be kind of shocking if the UFC went that route. It’s also worth noting that Maia hasn’t fought at 185 in years.

Opponent aside, Maia will have a strong case for inclusion into the UFC’s Hall of Fame when he retires. Maia has been a top contender for over a decade and during that time he’s fought a who’s who of the best welterweights and middleweights on the UFC roster.