Paulo Costa has traded verbal shots with Israel Adesanya for months now, and following the champ's win at UFC 248, the undefeated contender didn't hold back.

Paulo Costa and Israel Adesanya have formed quite the rivalry over the last year or so. As a result, no one should be too surprised that following the disappointing main event at UFC 248, Costa took the opportunity to rip the middleweight champ. 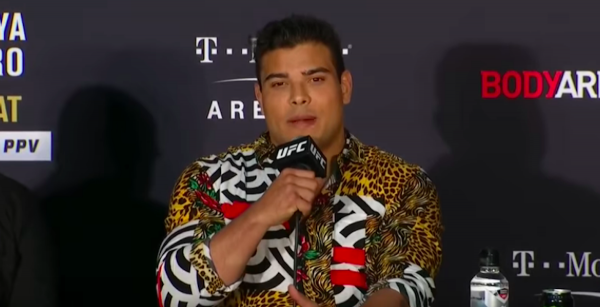 Adesanya faced Yoel Romero in Saturday’s main event, and the fight didn’t deliver the fireworks people hoped it would. Far from it. Romero came out tentatively, looking to counter, and after he hit Adesanya with a solid shot early on, the champ opted to fight from the outside. Eventually, there were a few, memorable exchanges, but far, far too few.

Well, since Costa is expected to receive the next title shot, he was in attendance at the event. Following Adesanya’s decision win, the Brazilian fighter was asked to comment on the headliner, and he proceeded to blast the champ (quotes via MMA Fighting):

“I will make him cry. I will hit him very badly. And he will cry like a baby. I will slap his face in my fight against him because—That’s it, he’s shameful.”

“I don’t blame Romero,” Costa said. “Romero’s the same against everybody. He never put 100 percent of pressure. He’s a little bit lazy and sometimes he explodes.

So, ya. As noted above, considering all the verbal sparring Costa and Adesanya have done in recent months, these comments aren’t shocking. But, is it really fair to accuse Adesanya have running? A lot of people would probably say no.

Romero is ridiculously dangerous, and it was clear from the get-go he was hoping to lull Adesanya into a full sense of security, and then bomb away. So, Adesanya elected to fight from the outside and chopped away at the wrestler’s leg. Further, Adesanya did pressure and more forward in multiple junctures of the bout.

Who won according to Costa?

And who did Costa think won the fight? When asked to weigh-in on the decision, the hulking middleweight said this:

“I think nobody deserves to get the win,” Costa said. “But Romero put more pressure. Romero took the middle of the cage.”

There you have it. All this talk about the UFC 248 headliner, and who was to blame for what went down (Dana White squarely blames Romero), chances are Adesanya – Costa will be much, much, better.