School Resource Officer Prays Every Day At The Flagpole, Inspires Others

A School Resource Officer in Arkansas prays for his students every morning at the flagpole before starting the day, encouraging others to live their faith.

Prayer can change lives. It is something that people of faith know and understand. It’s something that School Resource Officer (SRO) DeAndra Warren practices every morning in full view of everyone to see at the school where he works.

The Arkansas officer has worked for the Wynne Police Department in Arkansas for seven years. For the last five years, he has been a School Resource Officer at the local public schools. This officer has been praying for the students daily over the course of his assignment. In the past year, he took it up a notch and began praying at the flag pole.

“I’ve been praying for the students ever since I started being a SRO, but I started last year standing at the flagpole. I don’t do it to be seen but I do it to glorify my Lord and Savior Jesus Christ. To God be the Glory!”

His public prayers at the flagpole have inspired others.

We live in an era when religion is sanitized from public schools. But, people like Warren are showing us how to openly live our faith without hesitation. 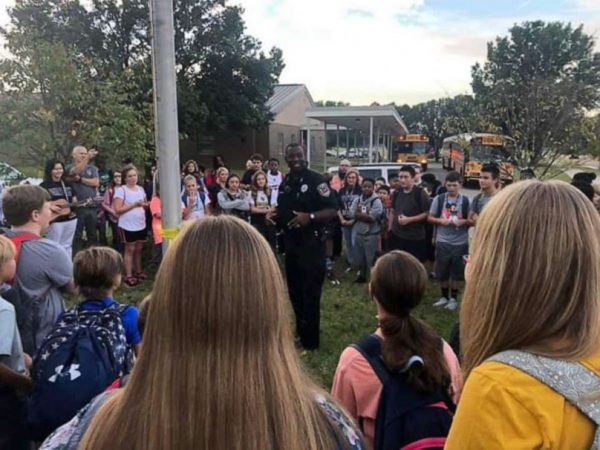 This deeply religious police officer is a minister and plays the drums at Tabernacle of Faith New Testament Church in Wynne.

From The Washington Examiner:

Officer DeAndra Warren has worked for the Wynne Police Department in eastern Arkansas for the last five years and said he felt “led by the spirit of God to pray at the flagpole” because of the overall negativity toward law enforcement in America and school systems.

Warren told the Washington Examiner that “it’s just time for America to turn back to God, and praying at the flagpole that holds the American flag is a way for me to stand in the gap for not just the students in Wynne, Arkansas, but for all students in America.”

Warren practices what he preaches. His daughter De’Andria shared a picture of him praying at the flagpole. This has given him a viral moment and allowed his message of prayer and hope to spread to others.

Often you don’t see an officer on school grounds at the flag pole praying for our children! I know this amazing Man of God who prays for our school systems, your children, and our community every day faithfully! This outstanding man is my dad and I’m so proud to be his daughter! There’s not too many people out here in this world like him! Officer Warren we are so thankful for you! 💙💛

RELATED: Trooper Pulls Over Grieving Couple, Offers to Pray With Them

Religion is often under attack but when people like DeAndra Warren don’t shy away from their beliefs, it encourages others to do the same.

RELATED: Complaint Against Christian Judge Reminds Us Religious Freedom Is Under Attack