Jared Cannonier has made it clear he's down to throw hands with Darren Till. But, don't expect the middleweight challenger to engage Till in Twitter wars or nickname challenges...

After the UFC’s attempt to have Jared Cannonier battle Darren Till earlier this month fell through, Cannonier is reporting he’s still more than willing to fight the former welterweight. But, it seems clear that some of Till’s online antics, aren’t sitting too well with the hulking middleweight. 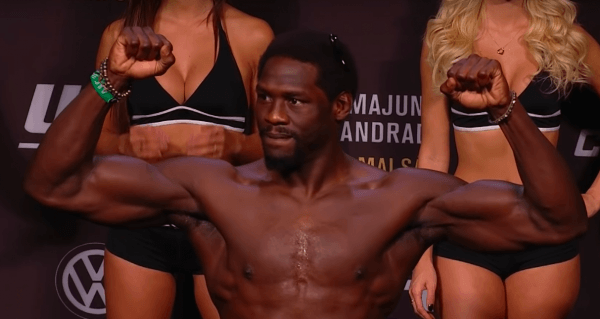 Cannonier blasts Till for trolling

The UFC looked at having Cannonier and Till fight at UFC 248, but visa issues for Till delayed the booking. Then, Cannonier incurred a pectoral injury and had to undergo surgery.

Well, it’s still not clear when and who Cannonier will fight next. But, Till is still driving for the match-up. During a recent appearance on Submission Radio, Cannonier relayed that he’s still down to fight the British star, just don’t expect him to engage in some sort of social media battle (quotes via MMA Junkie).

“Darren, he be on the social media, posting ‘Jared?’ I guess I don’t know what that means, ‘Jared question mark.’ What? What’s the question? Like, do I want to fight? I already said yes. So, now you’re gonna have to wait.”

“Darren likes to troll people,” he said. “That’s what the kids are doing nowadays on social media: They’re trolling everybody, just doing something completely ignorant and stupid, saying whatever comes to mind, which is usually something stupid or ignorant to get a rise out of people, a reaction out of people. But I’m a grown-ass man, and I’m gonna sit here and laugh at the dumb (expletive) and acknowledge the real (expletive). So, you won’t see me acknowledging any of that dumb (expletive).”

And what about a nickname challenge?

Since Cannonier’s nickname is “The Killa Gorilla”, and Till’s is “The Gorilla”, apparently the idea of a winner keeps their nickname has been floated. But, it seems clear that Cannonier won’t be putting his nickname on the line, if he ends up fighting Till.

“I think I was ‘The Killa Gorilla’ before he was ‘The Gorilla,’ so he can kiss my ass about changing names and stuff like that,” Cannonier said.

“Like I said, if he needs that for motivation, he can have that. He can do that himself, play out the scenario however he needs to. But at the end of the day, a fight’s a fight, names are just words. So, what we’re fighting for is something bigger than the name, I feel. We’re trying to get that title, we’re trying to cement whatever name I choose for you to call me. Cement that there in legacy or history.”

There you have it. It will be interesting to see if this match-up gets booked. But, with the ongoing coronavirus pandemic, the UFC’s upcoming schedule is kind of up in the air.