It remains to be seen what's going to happen with the UFC's summer schedule, as a result of the coronavirus pandemic. But, recently Daniel Cormier dropped a big hint that Kamaru Usman will be defending the welterweight crown, the same night he fights Stipe Miocic.

We haven’t been hearing much about the UFC’s summer schedule, due to the coronavirus pandemic, which has postponed the promotion’s next three events. But, recently Daniel Cormier teased an upcoming card will feature both a heavyweight championship bout, as well as a welterweight title fight. 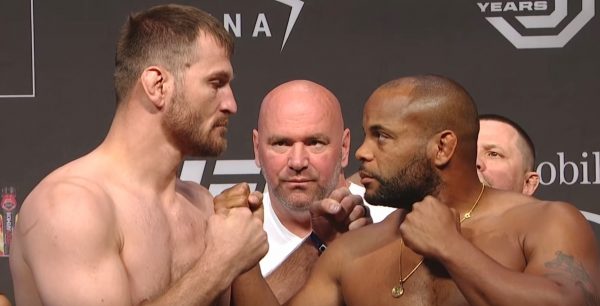 For months now, Cormier has said that the only bout that will return him to the Octagon, is a rubber match with Stipe Miocic. Cormier recently turned 41, and previously, he had said he wouldn’t compete into his forties.

Well, UFC President Dana White has said that the promotion wants to move forward with Miocic – Commier III, and the expectation was that the bout would take place this summer. Recently Cormier did an Instagram Live session alongside Usman, and while doing so, “DC” said this (quotes via MMA Fighting).

“Look, I know we’re in a crazy time right now with the world and with the way things are and it’s very up in the air but I think for me with the way things are going and the discussions that we had heading into the fight, into all this, the way that the discussions in terms of the fight were going, where I am going to fight this guy for my last fight, it’s going to be as ideal for me as I could ever hope for,” Cormier said. “It’s gonna be beautiful.”

“I know people like getting scoops, and I think if I’m guessing, I think the way things are falling you and I may be spending more time together than most people believe,” Cormier said.

“Obviously we can’t say a date and time yet but it is looking like you and I shall and will be sharing a party and I think that’s going to be a good thing.”

So, reading between the lines here, this could point to Usman vs. Jorge Masvidal being part of the UFC’s card during International Fight Week in early July. Previously, White had said that the UFC was hoping to have Usman and Masvidal fight that month.

Cormier repeats his next bout will be his last

Although Cormier has repeatedly said he’s going to hang up the gloves after his next, talk about him taking more bouts, if he were to reclaim the heavyweight title hasn’t completely gone away. But, during the aforementioned session, Cormier made it clear he hasn’t changed his mind.

“I got one [fight left],” Cormier said. “Some guy asked me today, he goes ‘you gonna keep fighting?’. I said no. I said I got one [more fight]. Cause here’s the deal, you fight these guys, they’re 28, 27, I think [Israel] Adesanya’s very young. Some of these guys are very young. I don’t have to fight a young guy.

Cormier ended Miocic’s reign as in 2018, by knocking him out in the first round at UFC 226. In their rematch last August at UFC 241, Miocic avenged that loss with a fourth round, stoppage win.