Coach Weighs-in on Whether Khabib Nurmagomedov Will Agree to Fight in Nevada, Due to Coronavirus Pandemic

Khabib Nurmagomedov has said he won't fight in Nevada again, as a result of the suspensions and fines he and his teammates received from the commission in 2018. But, could the champ change his mind? If UFC 249 is moved to Las Vegas?

As this is being written, UFC 249 and Khabib Nurmagomedov versus Tony Ferguson is still booked for April 18th in Brooklyn, New York. But, if the UFC decides to move the event to the promotion’s Apex facility in Las Vegas, will Khabib go along with the plan? 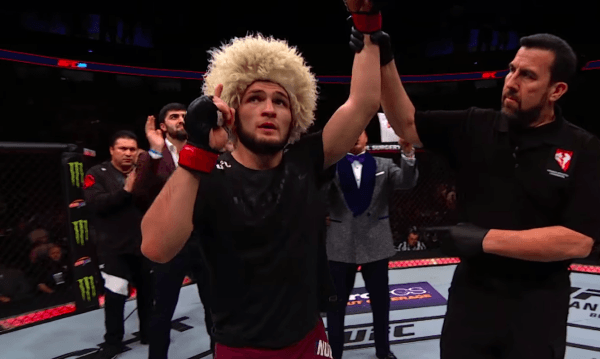 In recent days, more and more governments have been enacting temporary bans on large public gatherings, due to the coronavirus pandemic. Case in point, New York Governor Andrew Cuomo recently banned gatherings in the state of over 500 people for the time being.

Well, since UFC 249 is set to take place in Brooklyn in approximately one month’s time, the news sparked discussion about whether the card could be moved to the UFC’s Apex facility in Vegas.

But, due to the suspensions and fines Khabib and his teammates Abubakar Nurmagomedov and Zubaira Tukhugov received in 2018 (on account of the post-fight brawl at UFC 229), the champ’s said he won’t fight in Vegas. More recently, Nurmagomedov has said he might reconsider that position, if the commission apologizes, but there’s no reason to think that will happen.

Recently Khabib’s longtime striking coach, Javier Mendez, spoke with MMA Fighting. While discussing whether he thinks the star could change his mind about Vegas, if the Apex facility becomes the new venue for UFC 249, Mendez said this:

”For him, it’s more about what’s in his heart and what’s right,” Mendez said. “It’s all about that. Who knows under the circumstances if he’ll change. He might. He might, but I don’t know. I can’t speak for him.

”I do know he’s very strong in his beliefs. I do know that he’s made the comment that he won’t fight there (until the Nevada State Athletic Commission apologizes). Things change. This virus changes everything.”

”Things that he says now are not necessarily things that are going to happen,” he said. “That’s what he said, but what’s he going to say now? Whether we like it or not, we can’t hold Khabib anybody to their word on what they said before something like this happens.”

Could Khabib agree to fight at the Apex arena?

Now, it remains to be seen if the UFC tries to move UFC 249 to Vegas and its Apex arena. Further, depending on what happens in the next couple of weeks, the promotion may decide to postpone all events. Dana White has said they’re going to continue to hold cards, and behind closed doors if needed. But, if the pandemic gets a lot worse, they will need to revisit that position.

That aside, when you consider how long Mendez has known Khabib, it sounds like there’s reasons to think the champ might agree to fight in Vegas. Nurmagomedov – Ferguson is a massive fight, and it’s been cancelled four times in the past, so those factors could also play a role in Khabib’s decision.