The Rock’s Daughter Simone Signed By The WWE

The Rock's Daughter Simone Johnson has officially signed with the WWE. She is reporting to the WWE Performance Center and will be working her way up.

While it was generally known that The Rock’s Daughter Simone wanted to become a wrestler, little was known about her until now. In 2019, it was revealed that she had started training in the Performance Center, but now she has actually been signed by the company. So, we will see her in NXT soon!

We all knew that The Rock’s daughter would end up in the WWE in time and now it has officially happened. The company made the announcement on their website and on YouTube, and fans are excited!

As you may expect, Simone has reacted to the signing in an official press release. She had the following to say:

“It means the world to me. To know that my family has such a personal connection to wrestling is really special to me and I feel grateful to have the opportunity, not only to wrestle, but to carry on that legacy.”

Remember, The Rock is not the only person in her family to be a wrestler. Her grandfather and great-grandfather were wrestlers, too. Then there is also The Rock’s cousins Roman Reigns, Jimmy and Jey Uso, and Nia Jax. So, the WWE has become a family affair. 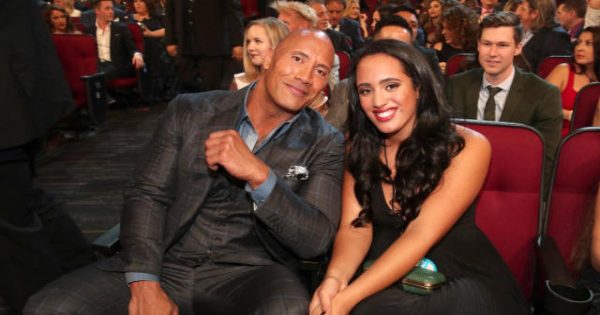 One might argue that the Rock’s Daughter Simone Johnson may have an easier time working her way through the ranks of NXT and the WWE. But, that’s not entirely true. While we have no doubt that her father opened doors for her within the company, as she has little to no indie experience, it does not mean that she will automatically get a spot at the top of the totem pole.

All In The Family

There are plenty of stars in the WWE who have famous fathers, but their road to the top was far from easy. In fact, there have even been aspiring sons and daughters of big-time wrestlers who never made it. Noelle Foley is a prime example. She didn’t make it through selection, but eventually got a job as an interviewer.

In the world of the WWE, Natalya and Charlotte Flair are prime examples of how difficult it can be to step in the footsteps of a famous wrestling parent. Natalya had to try out more than once. And, Charlotte Flair had problems with confidence and knowing who she was when she started in NXT.

Living up to a legacy as grand as that of The Rock is bound to be just as difficult for Simone Johnson.

The Rock did state in an interview that his daughter Simone had caught the wrestling bug. And, that’s exactly what’s needed to make it through in this industry. If you don’t have a passion and the athleticism to boot, you won’t make it very far. Fortunately, Simone has made it through selection and will now commence her training. I can’t wait to see what she brings to the table. I’m sure we’ll get to see her on NXT soon.