Jorge Masvidal doesn't want to fight his buddy and training partner, Tyron Woodley. But, recently "Gamebred" outlined what it would take to make that happen.

If Tyron Woodley and Jorge Masvidal win their upcoming, respective bouts, the friends could very well be on a collision course. Although Masvidal doesn’t want to throw hands with his teammate, recently “Gamebred” said he would, if indeed, the welterweight crown is on the line. 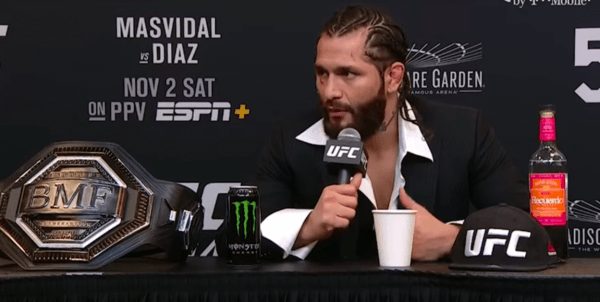 As this is being written, all the signs point to Masvidal fighting the UFC’s 170 champ, Kamaru Usman next. UFC President Dana White has said that’s the plan, and that the promotion is hoping to book the bout for this summer, likely during International Fight Week in July.

Woodley, meanwhile, is set to face surging contender Leon Edwards at UFC London, March 21st. That fight will mark the first time Woodley has competed, since he lost the belt to Usman in March, 2019. So, obviously if Masvidal goes on to win the 170 title, and if Woodley beats Edwards, a fight between the two would almost certainly get tabled.

So, how does Masvidal feel about the possibility of fighting his buddy? Recently he told Submission Radio the following (quote via MMA Junkie):

“In the case of Woodley, if I had to pick a guy I wouldn’t fight, it would be him,” Masvidal said. “That’s not a guy that I want to fight. But if we’re going fight, if we’re both in position for the belt, yeah, we’ll do it, and there’d be no heat about it. Afterwards, we’d go hang out, eat food, talk (expletive). Me and Woodley have a really good relationship and we see things really similar. It’s just business. It’s nothing personal.”

There you have it, and really, this makes sense. There is a considerable, financial upside to being a UFC champ than not, and because Woodley and Masvidal are seasoned vets, it’s not surprising to hear “Gamebred” say they could work through it.

And what about Edwards?

If you follow Masvidal, then you know he has some serious issues with Edwards, as the two had a backstage altercation last March. Due to Masvidal’s big 2019 year, and because he’s ahead of “Rocky” in the ranks, fighting his rival hasn’t been a top priority.

But, what if Edwards beats Woodley? While talking about that possibility, the outspoken fighter said this:

“If Leon wins the fight, it’s going to happen,” Masvidal said.” “Me and him are going to definitely fight, because now he’s a very strong candidate for the fight.”

Edwards is currently riding an eight fight winning streak and the last man to beat him is the aforementioned, Usman. The latter scored a decision win over Edwards in 2015.