Diego Sanchez continues to defend his coach Joshua Fabia. In fact, the rugged vet says the criticism he and his coach have been receiving is the "most disrespectful" situation he's endured to date.

Since Diego Sanchez got by Michel Pereira earlier this month with a disqualification win, plenty of people have been piling on his new coach, Joshua Fabia. But, the former TUF winner continues to vehemently defend Fabia and his coaching methods. 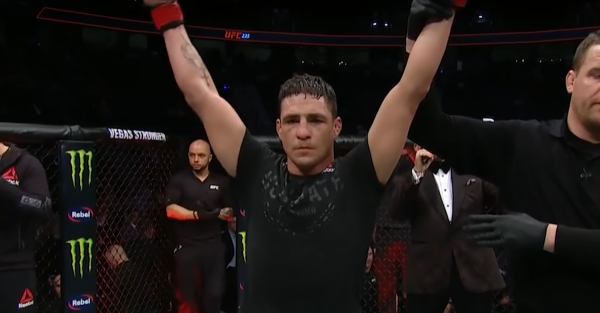 Sanchez faced Pereira at UFC Rio Rancho earlier this month, and after two rounds, it looked like he was headed for a loss. In round three, however, Pereira tagged Sanchez with an illegal knee and the veteran elected to not continue (handing him the DQ win).

Well, during the broadcast, commentators Daniel Cormier and Trevor Whittman were confused and or critical of the advice Fabia was giving Sanchez. Since the event, there’s been extensive talk and debate about Fabia’s coaching methods.

Further, recently it was reported that Fabia warned Nevada officials last year that Sanchez might attempt a move similar to the “Stone Cold Stunner” in his bout with Michael Chiesa.

The 38-year-old and Fabia recently spoke with MMA Junkie, however, and “The Nightmare” is standing by his coach. Here’s some of what Sanchez had to say:

“I could address that very easily,” Sanchez said. “Joshua is my brother, my mentor, my guide, my manager, my trainer.

“This has been the most disrespectful that my fans and the masses of the MMA community have addressed me in my career – just throwing all the hits and all the traumas that I took in the 16 years in the UFC. All this trauma that I took, I paid the price for the experience to make my own decisions in what is best for me going forward.

“I have always been different than everybody else and maybe that’s why I’ve lasted so long, alright. I continue to thrive in a special, unique, unorthodox approach that has led me to Joshua. And what he’s done for me, how this side of mixed martial arts is amazing and you really should look into it and become aware of that.”

So, it will be interesting to see whether Sanchez’ defense of Fabia reduces the scrutiny they’ve been incurring. Even if you think the blowback has been overboard, it’s hard to argue that the situation is somewhat unique. If Sanchez loses his next fight, and badly, then you know criticism and concern will spike again.

Speaking of Sanchez’s next bout, while discussing that, the New Mexico fighter said this:

“That’s a private meeting, so I’ll keep it very limited to – I’m moving forward, I am healthy, and I’m excited to do what I do,” Sanchez said. “I do this very passionately. I do love it. I am truly not fighting for only money and for all my retirement. No, I love being this person and having this voice to speak right now and have my fans listen. Just know that I’m healthy and my spirit is strong and I’m not going anywhere. I’m holding on.”