Jorge Masvidal may be one of the most vicious guys in all of MMA, but if you're wondering if "Gamebred" is also a nice dude, you have to watch this video.

Jorge Masvidal had a sizeable beef with Ben Askren by the time they fought last summer, and “Gamebred” wasn’t shy about celebrating his devastating knockout of “Funky”. But, as a new video of Masvidal getting pranked by Chase Hooper demonstrates, the fighter isn’t just about punishing his opponents. 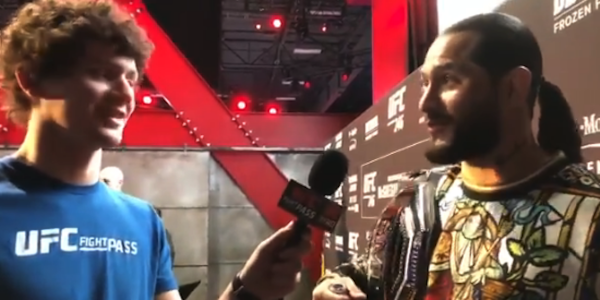 If you don’t know who Hooper, he is 20 year-old, rising featherweight who has gone 9-0 to date. Recently at UFC 245 he made his official Octagon debut and finished David Teymur.

Well, Hooper also has curly hair like Askren, and one could certainly argue they look like their relatives. If not close relatives. As a result, Hooper pulled the following prank on Masvidal, who viciously knocked Askren out at UFC 239 in July (quotes via MMA Junkie).

“So I’ve got one question for you,” Hooper said. “Why did you do that to my dad?”

That’s gold, and it’s particularly interesting due to the feud Masvidal and Askren had (although, the latter never appeared to have anything really personal against “Gamebred”). Leading up to UFC 239, Askren was pretty brash when it came to discussing how his bout with Masvidal would go, and the latter didn’t care for it.

As a result, after Masvidal bombed Askren out with a flying knee in just 5 seconds, he taunted the wrestler as he lay unconscious on the Octagon floor.