Officially, Ben Rothwell recorded his 37th pro-win at UFC DC this past Saturday. But, the heavyweight understands that the victory was stained by the much discussed, low blows.

On paper, Ben Rothwell ended a three fight losing skid at UFC DC by taking out Stefan Struve in the second round. But, Rothwell understands that the 37th victory on his extensive record will always be viewed as a controversial one. 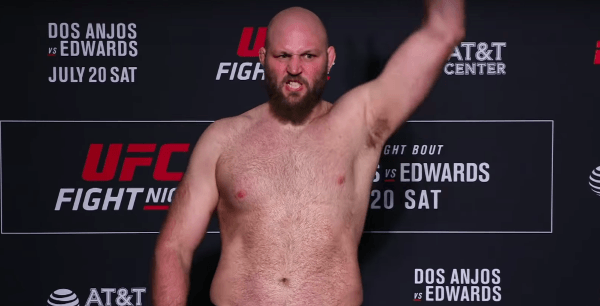 Rothwell knows the low blows have left an “asterisk”

If you watched the fight you know that Rothwell landed low blows to Struve in rounds one and two (it should be noted all signs point to the illegal strikes being unintentional). The low blow Struve took in round one left him on the canvas for some time, so much so, there was real concern the fight was going to be stopped. Then Struve took another one in round two, and Rothwell was deducted a point.

Struve elected to keep fighting, but later in round two, Rothwell put him down with a flurry of strikes. While discussing the win afterward, and the fact it was tainted by the low blows, Rothwell said this (quotes via MMA Fighting):

“Yeah, there’s an asterisk, but I can’t do anything about it,” Rothwell said. “I tried to be as apologetic as I could and complimented Stefan Struve for being a man. But, you’ve got to move on. I got myself in a really good position to have a big 2020 with all of my coaching staff and the conditioning I’m in. I just want to look better in my next fight. I want to be noticeably better the next time around.”

“I was down because I knew they were taking a point [away],” Rothwell said. “So I’m like ‘they might stop the fight.’ But then I looked at his cornermen and they were like ‘You’ve got to fight, you got the fight. Coast to a win. You got this.’ So, I was pretty sure he was going to keep fighting. Everything was against me. I had to get the finish or else I’d lose another decision.

No one can definitively say that Rothwell would have lost the bout if not for the low blows Struve took. But, you have to really wonder what would have transpired if they didn’t happen.

All this aside, it was a massive, massive win for Rothwell. As noted above, he had lost three straight prior to Saturday, and the rugged fighter knows the victory likely saved his job.

“I think I was on the chopping block,” Rothwell said. “Let’s be honest, I’ve lost three decisions prior to this. I didn’t get helped, I don’t get finished and I fight to the end. But four losses is four losses and it can’t happen. So, this was crucial.”