Ep. 1 of Nate Diaz’s UFC 244 Vlog is Out, Documenting Fight Week – Behind The Scenes

It's been a little over a month now since Nate Diaz threw hands with Jorge Masvidal at UFC 244. But recently the star's team shared out episode one of his vlog for the massive card.

Nate Diaz battled Jorge Masvidal last month at UFC 244, and now his team has released the first episode of his vlog for the massive fight. 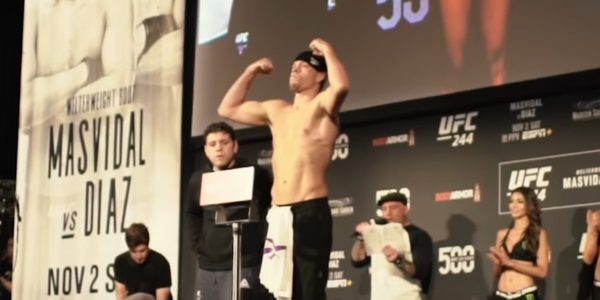 As you can see by watching the video below, episode one of the vlog features extensive footage of Diaz during fight week. That includes fans greeting the Stockton fighter in New York City, and taking selfies with him.

It will be interesting to see how many episodes are released, and what other footage they include.

As it stands right now, it’s not clear what’s going to be next for Nate. After his TKO loss to Masvidal, which came via a doctore stoppage due to a cut, he called for an immediate rematch. Since then, however, there hasn’t been any word about that happening. Nick Diaz’s team has also let it be known that he would like to fight “Gamebred”.