Fedor Emelianenko had never lost at the Saitama Super Arena, and "The Last Emperor" quickly extended that run tonight, by putting away "Rampage" Jackson.

Fedor Emelianenko has scored many, memorable wins in the Saitama Super Arena, and “The Last Emperor” did so again, by storming through “Rampage” Jackson at Bellator 237. 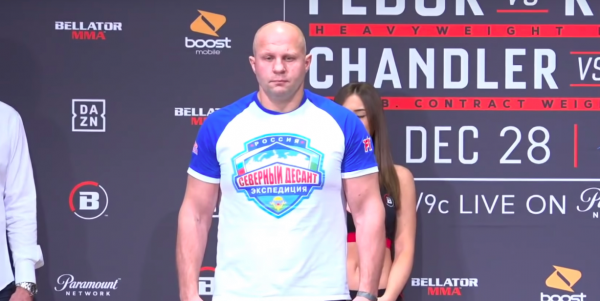 Fedor came out with a flurry moments in but Jackson covered up. Fedor planted a right and a jab moments later. Jackson winged a big hook that missed and Fedor continued to pressure. Fedor landed a leg kick but “Rampage” checked the next one nicely. Fedor flurried in again, and moments later, Emelianenko sent Jackson to the floor with a booming right. That is that. A first round, stoppage win for “The Last Emperor”.

Fedor was fighting for the first time since January, when he was stopped by Ryan Bader in the finals of Bellator’s heavyweight grand prix.

Here are the results for Bellator 237, which took place in Saitama, Japan.