Right now, most of the WWE roster is stuck in Saudi Arabia and they won't make SmackDown. Also, we know the reason Brock Lesnar - Cain Velasquez was short.

WWE is currently in the middle of a situation. Yesterday, they aired Crown Jewel from Saudi Arabia and now there are flight issues.

There was apparently a mechanical issue related to the plane’s fuel line. This is a major problem as SmackDown airs tonight and most of the roster is still overseas. WWE was scrabbling with some last minute ideas to make it back in time to the United States.

Now, PWInsider is saying that most of the superstars will not be returning in time for the blue brand’s show. Superstars have begun to book hotels in Riyadh with WWE is scrambling to put something together.

WWE were apparently able to get some of their top talent on a private plane out of the country and they are making the 20 hour trip to Buffalo for SmackDown. No word on which superstars were selected for the private plane. The report also stated that many within WWE were upset over the situation and openly complaining to WWE officials.

.@VinceMcMahon Hey, heard you are in a snafu.

My kids have SO many WWE action figures. Send a camera-op to my house and they can play out one hell of a SmackDown episode. DM serious offers only.

The fact that WWE talent and employees are stranded in Saudi Arabia because of a potential tiff between Vince and the government is legit shocking.

There is always the chance WWE could use talent from NXT to help fill some spots and there are a handful of names that did not make the trip. It is unclear if WWE wants RAW superstars appearing on SmackDown, even if it is for one night, since the recent draft.

Reason For Cain Velasquez Vs. Brock Lesnar Being So Short 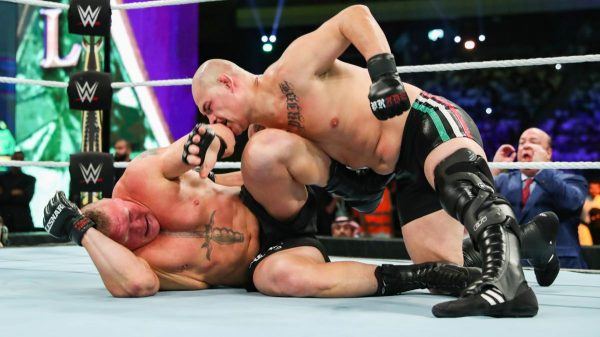 Cain will likely require knee surgery, but he is still scheduled for the November 30 live event from Mexico City. He teams with Rey Mysterio to take on Andrade & Drew McIntyre.

WWE really had Kofi Kingston lose the title so that Brock Lesnar could tap out Cain Velasquez in two minutes at #WWECrownJewel? 😕 pic.twitter.com/Fh5CoiibXS

Brock Lesnar and Cain Velasquez pretending to fight each other for the Saudi Arabian government nine years after really fighting pic.twitter.com/7ZLuSxI5ku

Before signing with WWE, there were several major promotions such as AEW and NJPW talking to the former UFC Heavyweight Champion. Velasquez’s WWE deal is said to be very lucrative and for three years.

Brock couldn’t beat Cain Velasquez in a real fight, so he beat him in a scripted fight.

With Lesnar’s win, he is now even with Velasquez; who defeated him nine years ago inside the UFC’s Octagon. While the first Lesnar-Velasquez match was short, do not be surprised if they meet again.

Matt Riddle And Brock Lesnar Backstage + Why No Sasha Banks