"Jacare" Souza says he was ready to go last night against Jan Blachowicz, but the former middleweight contender's revealed he battled an illness heading into UFC Sao Paulo.

“Jacare” Souza has revealed he was sick heading into UFC Sao Paulo. But, the former middleweight contender maintains he was ready to go five rounds with Jan Blachowicz. 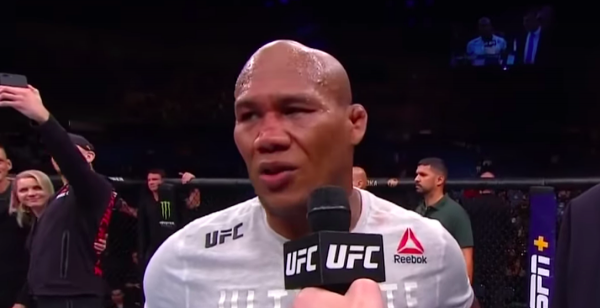 Following Souza’s decision loss to Jack Hermansson this past April, the longtime middleweight contender decided to move up to 205. In Saturday’s headliner, Souza repeatedly tried to take Blachowicz down, but the latter repeatedly denied the attempts. Although Souza pressured throughout the fight, ultimately, two judges awarded the tightly contested fight to Blachowicz.

After the bout, which prompted boos from the crown multiple times, Souza reported the following (quotes via MMA Junkie):

“I told the UFC I was coughing in a way that I can’t stop coughing, and this was 20 days ago,” Souza said through an interpreter. “We did a lot of exams and, first of all, I did treatment as if there was an allergy, and my doctor from Brazil here told (to do) a weird exam. … So 10 days ago was when I was diagnosed and on Monday was my last day taking antibiotics. I was going to give an interview, and when I did interviews I would start coughing and people would say, ‘What’s wrong?’ And I would say, ‘Nothing.’

“It didn’t get in my way. I was able to fight five rounds against a guy who was knocking everyone out in the light heavyweight division. I did my best to be here to fight. Unfortunately the victory didn’t come my way. It wasn’t a pretty fight. It wasn’t pretty for me, it wasn’t pretty for him, but I thought I won three rounds.”

“I fought well against a top-level guy,” Souza said.” He was knocking everyone out. I was able to use my strength and put him against the fence. He said that. I wasn’t able to impose my game and take him down. I tried to stop to attack in the fourth round because he hurt my leg, so that got in my way.”

While Souza says he was ready to go, you have to wonder if the illness may have impacted his abilities last night. That said, it’s rare any fighter goes into a bout at 100%. It’s also worth noting that Blachowicz injured his left foot in the bout. So, if that hadn’t happened, who knows what kind of output he would have been able to deliver.

Now it will be interesting to see who Souza faces next. If he had beaten Blachowicz, another fight with a top-five ranked light-heavyweight would have been likely. Will he face someone in the top 10? Or top 15?

UFC 251: Winners, Losers And What Comes Next