For Najim Wali, the opportunity to compete for the Cage Fury FC light heavyweight championship comes at a perfect time.

Wali will meet UFC veteran Mike Rhodes in the main event of Cage Fury FC 80 this Friday night. The event takes place from the Joint Base Langley-Eustis in Hampton, Virginia, streaming live on UFC Fight Pass.

“It feels good to be given this shot,” Wali told TheMix during a recent interview.

👑 The Light Heavyweight Title is on the line 👑
Don’t miss this stacked card featuring the best up-and-coming fighters from around the nation THIS FRIDAY in Hampton, VA

A member of Kaizen MMA, Wali trains under the watchful eye of Nima Mazhair and his team that includes Kamal Shalorus and others. However, for this upcoming contest, he branched out to expand his preparation.

“I was able to go to Elevation Fight Team and train with them as well as my team,” Wali said. “Quantum Movements has been helping me with my conditioning and movement, and my team and coaches have been working on my skills and timing.

“I feel great and ready.”

Wali found plenty of success on the amateur scene before turning pro. His resume includes the 2011 LOC MMA light heavyweight title, 2009-10 IFK title, a third place finish at the 2009 WKA National and first place finishes at both the 2006 World Sabaki Challenge and 2007 Euro-Asian Sabaki Challenge. 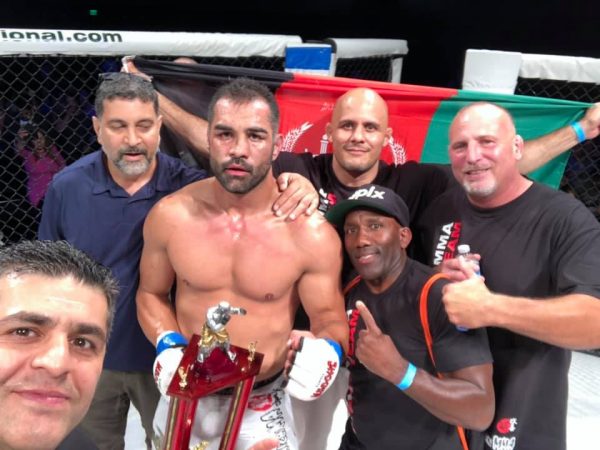 This contest, though, will mark his stiffest test to date. Rhodes has competed in the UFC, Bellator and several other promotions, going 11-6 overall.

“Mike has a lot of experience,” Wali said. “He has fought some good fighters and I look forward to the challenge.”

Wali, known as “The Afghan Rock,” is 36 years old. He earned a win earlier this year over Nick Grady via first round stoppage at Shogun Fights 22, but this contest with Cage Fury FC will give him the chance to shine on the big stage.

“It feels great knowing that anyone who didn’t make it to the fight will still watch me on (UFC Fight Pass).”

Like his opponent Rhodes, Wali has also faced a former champion before. In 2013 he met Liam McGeary at Bellator 108. McGeary would later go on to claim gold in the promotion.

As for his future, Wali is focusing solely on Rhodes and what this means to him for now before looking ahead.

“I would like to win and defend this title,” Wali said. “Then see what’s next.”

Cage Fury FC 80 will be a special “Fight for the Troops” event.

Get your tickets now
➡️ https://t.co/Cxf1tBWw2m 🎟️
*Open to the public and all ages*#CFFC #MMA #UFC #VA pic.twitter.com/hUgn40cKnz