Jose Aldo surprised many folks when he announced he's dropping to bantamweight. But, according to his teammate, Eduardo Dantas, the legend is going to make some big waves at 135.

When Jose Aldo announced that he’s going to make a run at bantamweight, not everyone was on board with the legend’s plan. But, the former UFC featherweight champ’s teammate, Eduardo Dantas, is reporting Aldo’s even more dangerous as he gets set for his bantamweight debut. 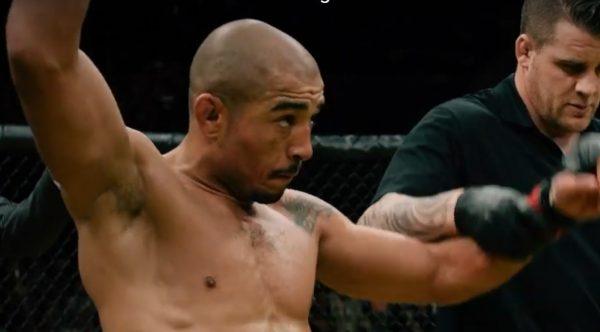 Dantas says Aldo is faster and just as powerful

Following Aldo’s loss to 145 contender Alexander Volkanovski in May, the Brazilian legend announced his plans to drop to 135. The news turned heads throughout the sport, as for years, there was talk about Aldo moving up to lightweight, not down to bantamweight. Case in point, UFC President Dana White said he didn’t want to see Aldo making that cut.

Well, fast forward to today, and Aldo is booked to fight Marlon Moraes at UFC 245, December 14th. Recently Dantas spoke with MMA Fighting, and while doing so, he reported this about Aldo’s camp:

“…Aldo always weighs around 158 pounds when he’s not training, and then goes up to 166 when in camp (for a featherweight bout), so I think it’s going to be an easy cut to bantamweight.”

“He’s training hard every morning. He’s very focused,” Dantas said. “He was one of the fighters in a sparring session on Tuesday, helping guys that are about to fight, and he sparred with a 135-pounder and a 177-pounder. He’s faster now but with the same punching power, so he’s way more dangerous. He’s kicking hard and landing heavy punches. He’ll surprise everyone with his speed and punching power at bantamweight.

“I saw him sparring with a heavier guy (177 pounds), keeping the distance and countering. The hand landed and the guy felt it and immediately shot for a takedown. He hasn’t lost his punching power and he’s still weighing 150.”

Now, some might question whether what Dantas reported above will hold true, after Aldo actually cuts down to 135 to weigh-in. But, it’s an encouraging sign for Aldo boosters, nonetheless.

Dantas weighs-in on Aldo vs. Moraes

And how does the former Belator champ see Aldo vs. Moraes playing out? While discussing the upcoming match-up, Dantas said this:

“It’s gonna be a great fight and I bet all my chips on Aldo,” Dantas said. “I train with him every day since forever and have trained with Marlon, too. Marlon is a tough fighter, very explosive with his right hand and left kicks, so you have to be careful.

“It’s a clash of similar styles, but I think Aldo’s championship experience will make the difference. I expect fireworks from this fight.”

It’s a very intriguing fight on paper. No doubt, and if Aldo (28-5) can get by Moraes (22-6-1), he’ll  jump right into the title shot mix. Moraes will be competing for the first time since June, when he failed to secure the bantamweight title at UFC 238, versus Henry Cejudo. Moraes had won four straight prior to the contest.

UFC 245 will go down at the T-Mobile Arena in Las Vegas, Nevada.