It's been reported that the UFC is working on having Conor McGregor battle Donald Cerrone in his comeback bout. But, according to Dustin Poirier, a rematch with him makes way more sense.

As it stands right now, it doesn’t look like a rematch between Conor McGregor and Dustin Poirier is going to happen anytime soon. But, that hasn’t stopped the latter from driving for the match-up. 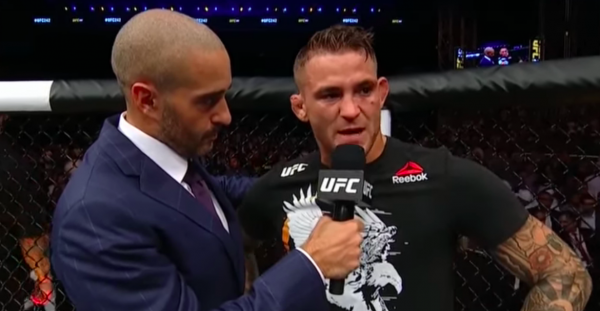 For months, McGregor pushed for a rematch with Khabib Nurmagomedov, but recently, it became clear that the UFC is planning to have Tony Ferguson fight the lightweight champ next. More recently, it’s been reported that the UFC is trying to book a bout between McGregor and Donald Cerrone.

Well, recently Poirier spoke with MMA Fighting, and while discussing the reported plans for “Cowboy” – McGregor, he said this:

“I respect “Cowboy” and everything he’s done but I do think he’s on the back end of his career,” Poirier said. “It’s “Cowboy,” he can show up and submit or knock out Conor as well. I’m not counting the guy completely out but I do think that is a more favorable fight for him on his return.

“Fight a guy who’s been KO’d or TKO’d twice in his past two fights. I’m not a matchmaker. I think me and [Conor] makes more sense.”

Poirier certainly isn’t the only person to argue that McGregor would be taking somewhat of a warm-up fight, in facing Cerrone. There’s no question that Cerrone is ridiculously tough and that he remains very dangerous. But, he is coming off losses to Ferguson and Justin Gaethje.

Poirier’s case for a rematch with McGregor

Poirier has campaigned for a rematch with Conor before, and clearly, the 30-year-old still believes he has a strong case for securing one. While expanding on why a rematch makes “more sense”, “The Diamond” said this:

“I think it would make more sense if he’s trying to get back to the top,” Poirier said. “I was the former interim world champion. Conor’s the former undisputed world champion. We fought years ago, we both had our separate paths and we’ve both done great things. I think this makes a lot of sense. I’m No. 2, I think he’s No. 3. It makes a lot of sense.

“I think the fans want to see it as well but time will tell. I definitely want that fight, and it’s something I want to do.”

A lot of people would likely be very interested in seeing Poirier and McGregor run it back. But, McGregor might argue he has little to gain by facing Poirier again (as he took him out in the first round of their 2014 bout). Sure, Poirier is ranked higher, but most folks believe that if McGregor beats Cerrone, a title shot could materialize.