Colby Covington is going to come under serious, serious verbal fire if he loses to Kamaru Usman at UFC 245, and it sounds like ATT owner Dan Lambert knows it.

Colby Covington has become one of the most disliked fighters in MMA over the last couple of years, due to his “Chaos” persona and various, controversial statements he’s made. As a result, if and when he loses, the American Top Team fighter is going to take some serious heat from his detractors. ATT owner Dan Lambert seems to know that. 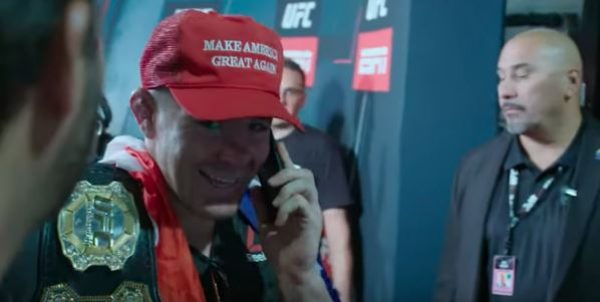 After trading verbal shots with Kamaru Usman for well over a year now, Covington will finally face the reigning, welterweight champ at UFC 245. The card is booked for December 14th at T-Mobile Arena in Las Vegas.

It’s a compelling match-up, and not just because of the rivalry. Both Usman and Covington are talented wrestlers, and both are known for bring an intense, pressuring pace for multiple rounds.

Well, recently the aforementioned Lambert spoke with BJ Penn.com, and here’s what he had had to say, while discussing the match-up:

“…Colby comes in and he works. He is not one to mess around. If the fight doesn’t go his way, it isn’t because he didn’t put the work in. There is no coincidence why his cardio is so good, his striking improved so much from one fight to the next…”

“Everybody has a theory until the fight starts, it will come down to who is the better and Colby is a better fighter than Usman,” Lambert said. “Usman is really, really good, but he is only that good when he can dictate the pace and take the breaks when he needs to take breaks, and he won’t be able to do that against Colby. Colby may not be able to do that to him either. Colby will have a few more weapons and an edge in the cardio.”

It’s an interesting take, although, some might question whether Usman might have the power advantage in the fight. It seems like many people are predicting Colby will have the edge in cardio, as Lambert stated.

As a result of various things Covington has said, not only has he created issues with numerous fighters on the UFC roster, he’s done so with ATT members like Jorge Masvidal and Dustin Poirier. While talking about what’s at stake for Covington in his bout with Usman, Lambert also made this interesting comment:

“I think Colby’s schtick and personality is a lot more effective when he is winning fights. So, this is a big one, a really big one.”

Yup. If Usman can go out and score a decisive win over Covington, it’s hard to imagine him moving forward with his “Chaos” act. Although, you never know.