Nate Diaz has established himself as one of the biggest names in all of combat sports, and his teammate and friend, Kron Gracie, loves how the star went about doing that.

Nate Diaz is unquestionably one of the biggest stars in all of MMA, despite the fact he’s been at odds with the UFC on more than one occasion. Well, recently his teammate Kron Gracie was asked to weigh-in on his friend’s success, and the galaxy class grappler heaped praise on the Stockton star. 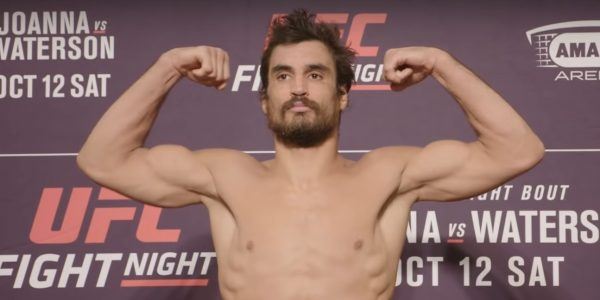 Due to the success of his older broth Nick, Nate already had a considerable amount of buzz tied to him when he made the cast for TUF 5. In the proceeding years, Diaz became a considerable draw within MMA circles. But, it wasn’t really until his epic bouts with Conor McGregor in 2016 that he became a mainstream star.

Similarly to his brother Nick, Nate has never been afraid to speak his mind, and that includes criticizing the UFC regarding matchmaking and fighter compensation. In addition, the Diaz brothers have had no problem remaining on the sidelines, if the UFC hasn’t offered them a bout or a payday they didn’t like.

Well, Diaz finally returned to action this past August and defeated Anthony Pettis. After the impressive win, he called for a fight with Jorge Masvidal, and the can’t miss bout will headline the November 2nd, UFC 244 card in New York City.

Ahead of Gracie’s fight today with Cub Swanson, the renowned jiu-jitsu competitor had this to say about Diaz’s success (quotes via MMA Junkie):

“I think it’s beautiful,” Gracie said. “Nate’s finally getting what he wanted, the recognition that he deserves, and he basically took that. He didn’t ask nobody for no favors, and no one was giving him no time of day at a certain point. He basically took that into his own hands, the power of his mind and his training and his fights and everything, and he was like, ‘You know what, I’m going to just go take what’s mine.’ He did. That’s all thanks to him and his spirit.”

“He created this belt out of thin air, and now it’s a belt,” Gracie said, while referencing the BMF belt Diaz and Masvidal will fight for. “I saw it on ESPN, and it said ‘Masvidal is fighting for the BMF belt.’ On ESPN it was a little thing and I was like, ‘What the (expletive)? They’re fighting for a belt now?’ This guy is amazing. It goes to show. I don’t need to say how impressive that is and how much of a star he is. I knew that from the beginning. I knew what he was and how powerful him and his brother are.”

Yup, even if you’re not a Diaz fan, you can’t deny that he’s achieved success largely on his own terms. That’s not a common thing in modern MMA.

Gracie will face Swanson today at UFC Tampa, which will be hosted by the Amalie Center. The 31-year-old Gracie (5-0) made his Octagon debut in February, and he submitted Alex Caceres in the first round.