Following his no-contest bout this past weekend at UFC Boston, Greg Hardy's jumping right back into the Octagon for a fight.

Not only is Greg Hardy not going to wait around long for his next fight, the former NFL player has been tapped for a bout with top heavyweight contender, Alexander Volkov. 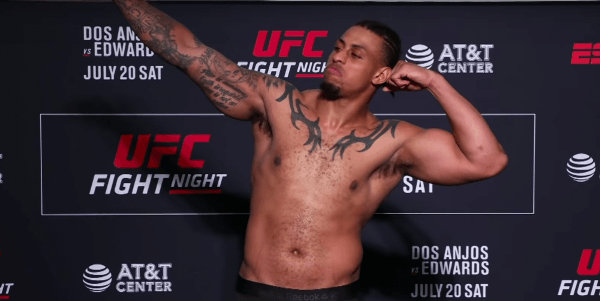 Hardy faced Ben Sosoli at UFC Boston last Friday night and worked his way to a decision win. But, since Hardy used an asthma inhaler between rounds two and three, the fight was ruled a no-contest. The fight, which marked the first time the controversial fighter had gone the distance, left Hardy’s record at 5-1, with 1 no-contest.

Stepping in for Junior dos Santos

Well, UFC President Dana White has told ESPN that Hardy has agreed to step in for Junior dos Santos at UFC Moscow. JDS was booked to fight Volkov at the November 9th card, but he’s been forced out due to a bacterial infection in his leg.

So, there’s no question this is the biggest fight of Hardy’s career to date, and it will very likely be his toughest. Volkov (30-7) is coming off a KO loss to Derrick Lewis last October. But, before that, the 6’7 tall, former Bellator champ was riding a six fight winning streak, and was knocking on the title shot door. The Russian fighter is currently ranked #7.