Chris Weidman has taken some heavy shots in the last few years, and as a result, Dominick Reyes doubts that the "All-American" will be able to stick around Friday.

There’s no question that Chris Weidman has fought the best of the best in recent years. But, as Dominick Reyes gets set to fight the UFC’s former middleweight champ, he’s questioning what the cost of those battles has been. 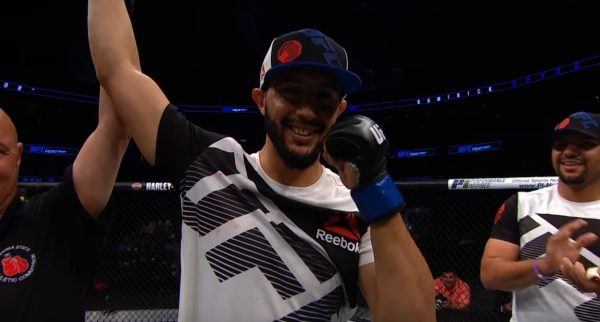 At this time in 2015, Weidman was sitting atop of the UFC’s middleweight division and was widely considered to be one of the best, pound-for-pound fighters on Earth. But, at UFC 194 in December of that year, Weidman’s reign as the 185 champ was halted by Luke Rockhold.

The now 35-year-old was stopped in consecutive fights against Yoel Romero and Gegard Mousais, before he returned to the win column in 2017, by submitting Kelvin Gastelum. But, at UFC 230 in November, 2018, Weidman was taken out by “Jacare” Souza.

Reyes’ take on this Friday’s fight

Following Weidman’s loss to Souza, he decided it was time to move up 205. This Friday, in the headliner of UFC Boston, the decorated wrestler will take on Reyes. While talking to the media recently Reyes had this to say, while discussing whether he believes Weidman’s chin can hold up against him (quotes via MMA Junkie):

“That remains to be seen,” Reyes said. “That’s the question we all have. Will his chin hold up? I don’t think it will. He’s been in some real wars, man – a lot of wars. These fights aren’t just like quick fights. He’s not getting quick knockouts.

“He’s fighting, he’s bleeding, he’s getting shots. Every shot takes a little bit off your energy bar. … He’s getting knocked out, so I’m going to capitalize on that.”

It’s an interesting argument. Weidman has been finished in four of his last five fights, and by moving to light-heavyweight, in theory, he’ll be facing heavier handed fighters. It is worth noting, however, that due to injuries, these losses have been spread out over a four year time frame.

Recently Weidman opined that if he beats Reyes, then a fight with champion Jon Jones could be next.  While discussing what he believes is on the line this Friday, Reyes said this:

“…Me taking him out with his big name brings me closer to the title. We’re both bringing something to the table, and I look forward to knocking out my signature win.”

Since Reyes is ranked #4, a win over a big name like Weidman could indeed, propel him into a title fight. Especially if he can score a decisive or highlight reel victory.

UFC Boston will be hosted by the city’s TD Garden.