UFC 244: Nate Diaz Says he “Doubled up” on His Supplements, Following USADA Scare

Recently the MMA world was a nervous wreck, after it was reported a pre-fight drug test Nate Diaz took had been flagged. But, the outspoken, Stockton star says he's not about to drop any supplement he's been taking.

Although a supplement Nate Diaz has been taking turned the MMA world upside down for a couple of days, the Stockton star isn’t about to change his pre-fight regiment. In fact, according to the outspoken fighter, he increased his supplement intake… 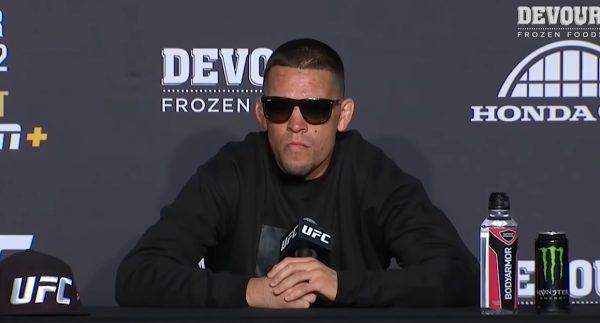 Last week. Diaz prompted a collective gasp in the combat sports world, when he announced  a pre-fight drug test he took came back for “elevated levels”. At the time, Diaz said he wasn’t going to head to New York City for his bout this Saturday with Jorge Masvidal, spiking anxiety and agony throughout MMA.

The flag was for trace amounts of LGD-4033, which stimulates muscle growth. But, since the amount of the banned substance was so small, it was concluded no performance enhancing impact took place. Further, because it was tied to an organic, multivitamin the star took, Diaz is still clear to fight at UFC 244.

Diaz’s latest comments about the flag

Well, recently the UFC held a media call in advance of this Saturday’s card. While discussing whether he’s changed up his supplment diet as a result of the flag, Diaz said this (quotes via MMA Fighting):

“I did not stop taking any supplements,” Diaz said. “I did not stop doing anything that I do. I just kept on keeping on. I doubled up on supplements cause I got all vegan, all Garden Life, all f*cking just plant-based sh*t. I just kept going. The next test came in, and I’m like what’s this one say, like laughing and they’re like ‘this one you’re testing higher,’ and I’m like, ‘You guys are f*cking with me now.’

“I kept doing what I was doing. They’ve got to retest, or check their sh*t, cause something’s wrong with their sh*t. You guys are over here trying to stress me out when I’ve got a fight. This ain’t fair grounds right here. This ain’t fair grounds for me, you’re over here sweating me about this. So how about the fight’s f*cking off and let’s let UFC and Masvidal and all these motherf*ckers sweat.”

“They try to do this, they try to do that, and I’m like, ‘Well all right, this is done, clear it up because if it’s not clear, I quit right now,’” Diaz said. “They cleared it up, and it was just a little half a speed-bump; I wasn’t even worried about.

If you’ve followed Diaz over the years, none of what he said above should come as a surprise. The good news is that the ‘BMF’ title is moving ahead as planned.