Israel Adesanya may have scored his most impressive and biggest win on Saturday night. But, apparently “The Last Stylebender’s” latest performance didn’t change Paulo Costa’s belief he’ll bomb out the vaunted striker. 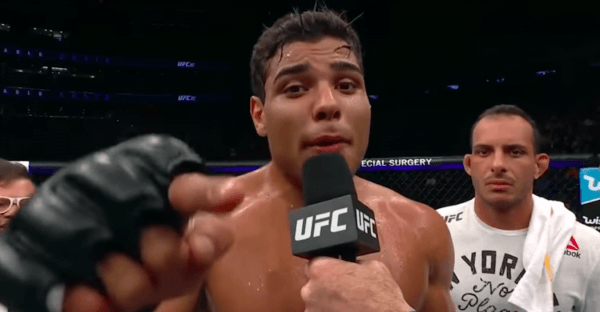 Adesanya faced Robert Whittaker in the headliner of UFC 243, and he finished the Australian star with a crushing left hook in round two. Whittaker threatened with some big shots in the fight, but Adesanya never appeared to be in any serious danger. The bout marked the first time Whittaker had been defeated since 2014, and the loss snapped the latter’s nine-fight winning streak. A streak, it’s important to remember, that included wins over Yoel Romero, “Jacare” Souza and Derek Brunson.

Well, Costa was in attendance at UFC 243, since he’s expected to challenge for the 185 title next. While talking to ESPN after Adesanya’s win, Costa had this to say (quotes via MMA Fighting):

”He cannot handle it from me,” Costa said. “When I close the distance, I can KO him.”

”I think Robert Whittaker started the fight very well,” Costa said. “He closed the distance, because everybody knows when you close the distance against Israel Adesanya, he loses.

”His distance, his timing – he cannot fight with guys who pressure him. Everybody watched that fight against (Kelvin) Gastelum. If Gastelum has my power, I think Gastelum knocks him out.”

So, ya. These are some pretty strong words, but, if you’ve followed Costa and Adesanya’s issues, you probably aren’t surprised.  Does Costa really believe what he’s saying? Or is he amping up the rhetoric on account of his dislike for Adesanya?

It’s probably some of the latter, but considering how powerful Costa and what he’s accomplished to date, chances are he feels certain he can put away Adesanya. We shall see.

Costa is coming off a decision win over Romero in August and had has gone 13-0 in pro-MMA.