Thiago Santos Still Hopes to Run it Back With Jon Jones, Without Tune-up Fight

Thiago Santos is reporting that his recovery is going well, following surgeries to both knees, and the punishing striker's still hunting a rematch with Jon Jones.

After giving Jon Jones, what some people believe, was his biggest test to date this past July, Thiago Santos is still driving for an immediate rematch with the light-heavyweight champ. 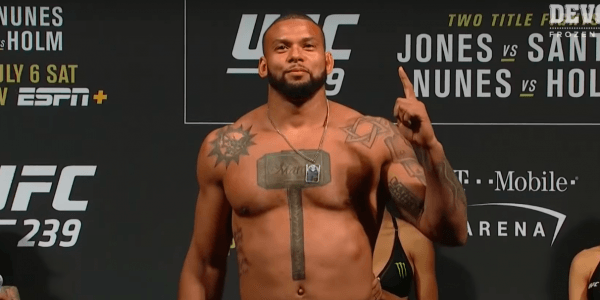 Jones narrowly gets by Santos

Santos was tapped to fight the champion at UFC 239, after “Marreta” put together a four fight, winning streak,which included wins over contenders like Jimi Manuwa and Jan Blachowicz. Santos surprised many by going five rounds with Jones, and by pushing the all-star fighter. In fact, one judge awarded the fight to the challenger. The outing was particularly impressive, as Santos  battled Jones for five rounds, despite sustaining injuries to both of his knees during the contest.

Recently the 35-year-old Brazilian fighter spoke with MMA Fighting, and he provided this update on his recovery:

“Man, the only thing I can’t do is kick, but I can box, I can work on my hands and do conditioning training as well,” Santos said. “I can even ride a bike. I’m not able to run yet. That’s it. I can do a bunch of things, actually.”

Santos is reportedly hoping to fight in the second quarter of 2020. So, who he is hoping to fight? Santos has said before that he wants to run it back with Jones, and while discussing whether he needs a tune-up fight first, “Marreta” said this:

You have to admire Santos for his ambition and desire to face Jones again. But, the chances of the UFC giving him an immediate rematch are likely, very small. Jones has argued the fight was only close because he didn’t mix in his wrestling, and after the bout Dana White opined there was no doubt Jones had won.

So, Santos will likely need to record another win, if not two, before another title shot is a real possibility. But, you never know. If Jones is booked for a fight and the opponent drops out, maybe the UFC would give Santos a call.