Although Robert Whittaker's reign as middleweight champ was violently halted by Israel Adesanya, the rugged star continues to sound very upbeat and optimistic about what lies ahead.

Immediately after Robert Whittaker was taken out by Israel Adesanya at UFC 243, the now former middleweight champ refused to beat himself up over the loss. Well, several days removed from the stoppage loss it looks like that hasn’t changed. 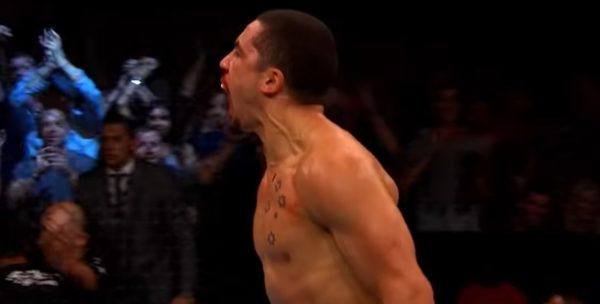 Whittaker was booked to fight Adesanya last weekend riding a nine fight winning streak, which included noteworthy and impressive wins over top middleweights like “Jacare” Souza, Derek Brunson and Yoel Romero. While many people believed Adesanya would unify the middleweight titles at UFC 243, there were certainly others who predicted Whittaker’s reign would continue. That didn’t turn out to be the case, however, as Adesanya put away the Australian star in round two.

At the post-fight presser for UFC 243, Whittaker opined he had been performing well in the bout with Adesanya, before getting caught. More recently, while speaking with GrangeTV, “Bobby Knuckles” had this to say about the defeat (quotes via MMA Fighting):

“People may not know this, but I’ve lost before,” Whittaker said. “I’ve lost before and I’ve came back better and that’s exactly what I intend to do. I’m under no illusion that I was unbeatable; everybody can beat everybody on any given day. I’m just going to lick my wounds, I’m going to get back on the mats on Monday, and I’m going to start training again and try to beat the next guy.”

“…This isn’t even a setback, this is just part of the career,” Whittaker said. “This is just part of my journey. This is part of the ups and downs of fighting. If you never wanted to encounter hardships like this or the taste of defeat, then I never would have put my hat in the ring, because it’s always there. It’s looming. Everybody loses. Except Khabib. [Laughs]. And I stand by that. I don’t think he ever loses. That guy is unreal. But yeah, everybody barring Khabib loses. It’s just part of the game. So I’m not gonna retire just because I lost. F*cking hell, that’s stupid.”

Now, sure, some might argue that losing the UFC’s middleweight belt constitutes a setback, no matter how you want to spin it. But, the fact Whittaker’s remaining upbeat is understandable. After all, he’s not even 30 yet, and he’s coming off one of the more impressive stretches in recent MMA history.

In the aforementioned interview, Whittaker also said that he’s targeting next February or March for his next fight. Who could be next for “Bobby Knuckles”?