Israel Adesanya and Jared Cannonier have talked very respectfully about one another's abilities as of late. But, Cannonier's reporting he's already put "energies" out there and he believes he'll defeat the champ.

Israel Adesanya has taken notice of Jared Cannonier’s rise up the middleweight ranks, and the UFC champ has relayed he’s a fan of the powerful fighter as well. Well, while Cannonier also admires and respects the vaunted striker, it’s clear the former heavyweight’s been thinking about how he’ll end Adesanya’s reign. 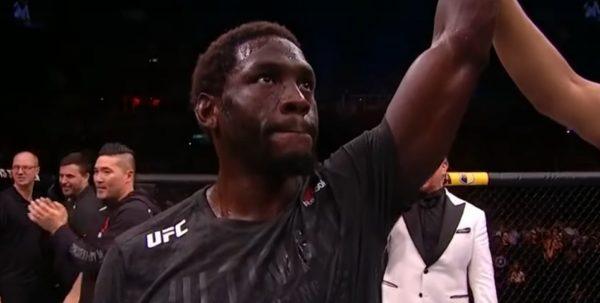 Cannonier’s rise up the 185 ranks

Cannonier made his way to the UFC as a heavyweight in 2015, but by 2016, he had moved down to 205. After incurring several losses at that weight (against top light-heavyweights in Glover Teixeira, Jan Blachowicz and Dominick Reyes it should be noted), Cannonier dropped to 185 to face David Branch.

The now 35-year-old took out Branch in impressive fashion, and since then, Cannonier’s scored wins over the legendary Anderson Silva and contender Jack Hermansson. As a result, the consensus is that the heavy-handed fighter could be one win away from securing a title shot.

After Adesanya took out Robert Whittaker earlier this month to unify the middleweight titles, “The Last Stylebender” reported that he likes Cannonier and that he’s been impressed by his run. More recently, Cannonier spoke with MMA Fighting and the surging fighter had this to say about the champ:

“It’s definitely high praise coming from the middleweight champion, let alone a striker of that caliber,” Cannonier said. “A fighter with the kind of experience that he’s had; he’s had over 100 fights. That’s a lot of experience. He’s been doing this a long time. He probably has a keener eye of what’s going on in the division and he recognizes.

It will be interesting to see who Cannonier faces next. As noted above, he’s likely one big win away from advancing to a title fight. As it stands right now, Cannonier is ranked #5, and as a result, talk about him possibly fighting Yoel Romero or Robert Whittaker has made the rounds. If he could beat either the former champ in Whittaker or the longtime contender in Romero, it’s hard to imagine that a title shot wouldn’t come next.