After reclaiming Bellator's welterweight crown, Douglas Lima has let it be known that he wants to fight the UFC's 170 king, Kamaru Usman.

Douglas Lima reminded the MMA world this past Saturday that he remains one of the best welterweights on the planet. Now the Bellator champ hopes to prove he’s in fact, the very best, by throwing down with UFC champ, Kamaru Usman. 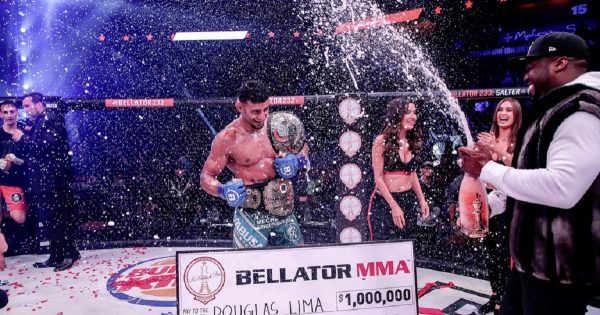 Lima faced now former champion Rory MacDonald in the main event of Bellator 232 on Saturday, in a fight that also served as the finals for the promotion’s welterweight grand prix. Although the bout didn’t leave the masses buzzing with excitement, it did see Lima defend multiple takedown attempts from MacDonald, and outscore him for the decision win.

It marked the third time Lima has won Bellator’s welterweight belt, and it also avenged his loss to MacDonald in January, 2018 (which ended his second reign as champion).

Well, following his massive win (which also came with a $1 million dollar check), Lima spoke with TMZ Sports. While doing so, the heavy-handed fighter had this to say about the UFC and Usman (quotes via MMA Junkie):

“It’s not the name ‘UFC,’ or ‘Bellator,’ or ‘ONE FC’ – there’s killers everywhere, and I’ve been fighting all these guys. I’ve been beating them,” Lima said. “(I’m a) three-time world champion, three tournament (wins), but they still don’t believe me. Now that (Bellator president) Scott Coker is doing the co-promotions – he’s doing that with Rizin – I would love if we would do that with the UFC.”

“Of course I’ll do great – I’ll beat him,” Lima said. “I’ll probably KO him, you know. But he’s a great wrestler, for sure. He wrestles a lot. But man, any point in that fight if I connect, I can put him away. I don’t even think about that. I just know that I can beat him. I know I can beat anybody at this weight class. I’m not talking bad about the guy. He’s the champion there. He’s doing his thing. But I just know it, man – if one day something like this happened, I definitely believe in myself to just go over there and just kill it.”

So, there’s a couple of things to look at here. One, there’s no question that a lot of people would love to see Lima battle Usman and other top tier welterweights in the UFC. For years, hardcore fans and pundits have understood that Lima is one of the best and most dangerous welterweights in the game. But, the chances of the UFC cross-promoting with its biggest competitor ( in terms of the North American market) are slim to none (unfortunately).

And as far s Lima’s comments about taking out Usman? There are likely plenty of people who wouldn’t pick Lima to beat Usman and the latter would probably be the betting odds favorite. Lima showcased fantastic wrestling defense against MacDonald, but he doesn’t have the wrestling pedigree of Usman. Of course that doesn’t mean that Lima couldn’t “put him away” if he landed the right shot.