Both AEW and Jack Swagger kept news of his signing with the promotion to a minimum before debuting on TNT, and would The Rock's dad join AEW? 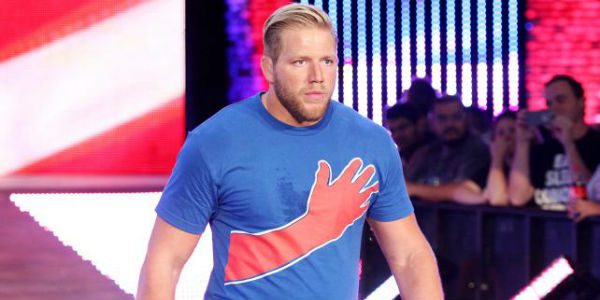 The AEW and Jack Swagger made headlines Wednesday night when the former WWE champion debuted at the end of the main event and joined Chris Jericho’s stable. Swagger, who competes for Bellator MMA under his real name, Jake Hager, is planning to balance being an MMA fighter with pro wrestling.

“It’s something we’ve been planning for,” AEW president Tony Khan told Wrestling Inc. “He moved his camp to accommodate this, but he’s also still in training and has a good schedule with that. The AEW schedule with Wednesdays allows him to make Wednesday the off day so he can train Friday-to-Tuesday and that’s what Jake’s doing right now.”

Swagger is expected to face Anthony Garrett at Bellator 231 on October 25 in a heavyweight contest. He is currently 2-0 in MMA, with both bouts coming under the Bellator banner.

As for his appearance on the debut of AEW on TNT, Khan talked about the timing of his signing and the use of Swagger on the program.

After the end of the six-man tag match, Swagger helped Jericho, Santana, Ortiz and Sammy Guevara impose their will on Cody, Dustin Rhodes and The Young Bucks.

Rocky Johnson, Father Of The Rock, On Joining AEW

Before the recent explosion of AEW, Rocky Johnson was approached about joining on with the wrestling promotion. Johnson, the father of superstar The Rock, worked closely with Dusty Rhodes while both were patrolling the rings and claiming titles.

“It was great working with Dusty. We were tag champs in Florida and we switched back and forth with the heavyweight belt. Now that his son has a chance with this Elite Wrestling, they have the capital and everything. I had talked with them and probably could have worked with them, but I’m not interested anymore,” said Johnson in an interview with Wrestling Inc. “But, the point is, that no matter how much money you’ve got, if you don’t have talent then you’re not gonna draw. But they are smart enough in that they are getting these independents and are opening a school where they’re gonna develop their own talent.”

Johnson, who was inducted into the WWE Hall of Fame in 2008, held the WWF tag team titles with Tony Atlas. He also was a champion in several regional NWA promotions during his career.