After buzzing the MMA world at UFC Shenzhen yesterday, new strawweight champ Weili Zhang is predicting she’ll hold the 115 crown for a prolonged period of time. Not only that, the rising Chinese star says she’s down for an all-star match-up with flyweight champ, Valentina Shevchenko. 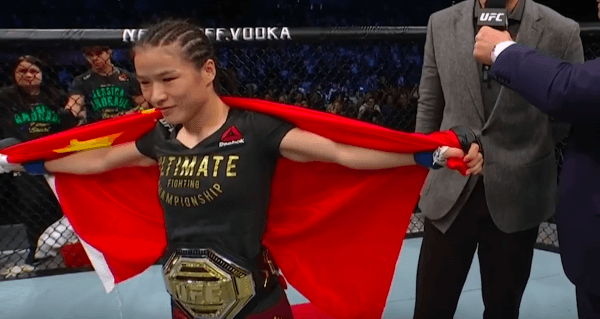 Hardcore fans and observers had taken note of Zhang during her UFC run, on account of her winning her first three Octagon bouts. But, the consensus was that the now-former champ Jessica Andrade, would defend the crown. The betting lines also reflected that belief.

Well, not only did Zhang defeat Andrade, she did so in electrifying fashion, by finishing the powerful Brazilian in under one minute.  It was a historic victory, as Zheng is now the first Chinese champion in UFC history.

After the massive win, which moved Zheng’s record to an awe-inspiring 20-1,  she had this to say about her plans for the strawweight division (quotes via MMA Fighting):

“I think they all want to fight me because I’m a champion,” Zhang said through a translator. “I can defend (the belt) several times, maybe for a long time, because I know all my opponents very well. I can beat them.”

“Yes, I would like to get on a pay-per-view event, but I also want a pay-per-view event to hold in China. This is my wish,” Zhang said. “If Dana wants me to fight in the U.S. it will be fine, but please get all my corners a visa because last time my corners didn’t come. Several corners could not come because of a visa issue.”

If Zheng defends the belt and scores a couple more wins as champ, you can count on the UFC booking another event in China with her headlining. The country is a massive, massive market, and Zheng could open the door to a wave of revenue.

Zheng was also asked about the possibility of fighting flyweight champ, Valentina Shevchenko at some juncture. “Magnum” said this:

Obviously Zheng has some work to do yet before an all-star fight with Shevchenko materializes. But, you would think the UFC would be very interested in putting this bout together, during this new age of the champ-champ.