Donald Cerrone drove for a fight with Conor McGregor in the past, but it doesn't sound like "Cowboy" will be calling out the star if he wins at UFC Vancouver.

Recently there’s been talk about the winner of today’s Donald Cerrone – Justin Gaethje fight facing Conor McGregor next. But, based off comments Cerrone recently made, it will be surprising if he we hear him call out the star at UFC Vancouver. 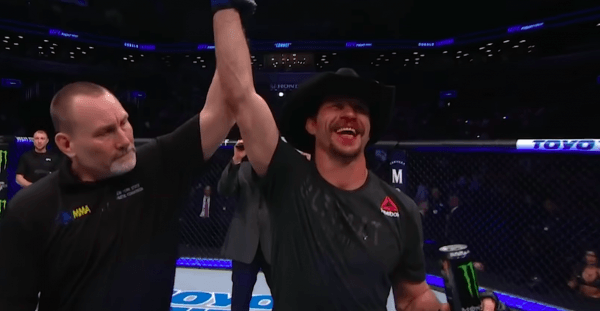 Earlier this year, Cerrone repeatedly called for a fight with McGregor, and the latter also expressed an interest in the match-up. But, the fight never materialized, and earlier this summer, Cerrone claimed McGregor passed on fighting him several times.

Since Gaethje is currently ranked #5 in the UFC’s 155 division, and because Cerrone is #4, there’s been buzz about the winner of tonight’s contest possibly facing McGregor next. After all, the champ Khabib Nurmagomedov has said McGregor doesn’t deserve a rematch, and Dana White’s said Tony Ferguson is first in line for a title shot.

But, while talking to the media this week, Cerrone reported he’s done pursuing a fight with McGregor (quote via MMA Junkie):

“Chasing that, it’s not even worth it to me anymore,” Cerrone said. “(Expletive) or get off the pot, bro. But yeah, there’s no one else.”

You can’t really fault Cerrone for feeling this way. McGregor has expressed an interest in fighting several different opponents, but as it stands right now, there’s no real indication of when he’ll return to the Octagon.

Cerrone calls for Ferguson to get a title shot

Prior to UFC 242, and Khabib’s win over Dustin Poirier, both fighters acknowledged that Ferguson should fight for the belt next. When Cerrone was asked about this he had no disagreements:

“Hell yeah, man! Give the dude his dues,” Cerrone said.

“That would be tough for Tony to swallow,” he said. “No, (Ferguson) deserves it. For sure.”

Here is the line-up for UFC Vancouver (via MMA Mania).