ONE Warrior Series 8 Features Japan Taking On The World

Rich Franklin’s ONE Warrior Series has announced the complete card for ONE Warrior Series: Japan vs. the World, set to take place during the ONE Martial Arts Fan Fest at the Bellesalle Shibuya Garden in Tokyo on Saturday, October 5.

The marquee attraction at the two-day esports and martial arts event will see the industry’s fastest rising stars and athletes from across the globe compete for a chance to earn a six-figure contract with ONE Championship.

ONE Warrior Series: Japan vs. the World features Japan’s fastest rising stars taking on the best prospects in the world in mixed martial arts, kickboxing, and Muay Thai. Japan’s two largest mixed martial arts promotions, Shooto and Pancrase will be well-represented featuring a number of athletes.

ONE Warrior Series 8: Japan vs. the World 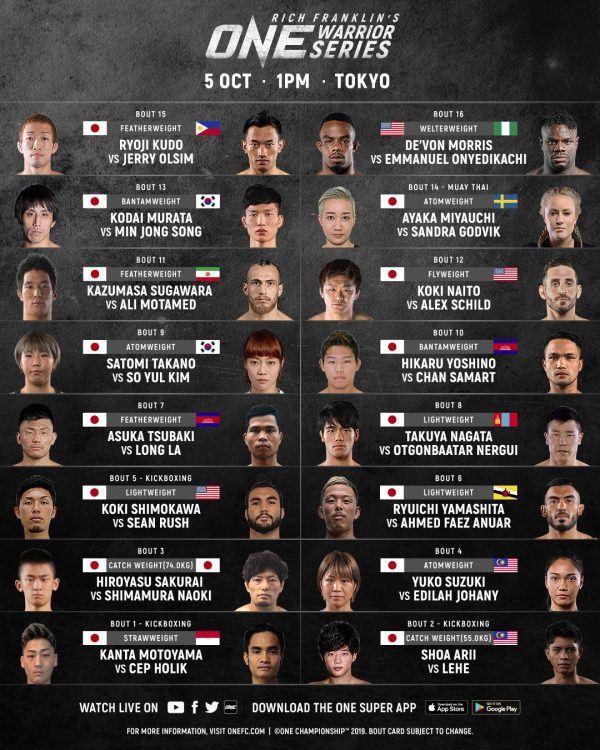 In the main event, De’von “Bam Bam” Morris of the United States will take on Emmanuel “The Biafran Warrior” Onyedikachi of Nigeria. Morris and Onyedikachi first met last February, when the American took home an impressive second round knockout victory, dealing Onyedikachi his first loss as a professional. Now the two martial artists look to run it back in a highly-anticipated rematch.

In the co-main event, Tribe Tokyo MMA representative Ryoji Kudo of Japan will make his ONE Warrior Series debut against unbeaten Philippine prospect Jerry “Bokodian Warrior” Olsim. Olsim has four victories under the ONE Warrior Series banner and has delighted with his fan-friendly style.

Rich Franklin, CEO of ONE Warrior Series, stated: “We are excited to take the ONE Warrior Series event to Japan and test their history of mixed martial arts against athletes from other countries around the world. There are 14 countries represented on this card, as well as several athletes from both Pancrase and Shooto, the two largest promotions in Japan. The card is stacked from top to bottom, with a main event rematch I personally cannot wait to see between De’von Morris and Emmanuel Onyedikachi.”

Jonathan Fong, Director of ONE Warrior Series, stated: “ONE: CENTURY is putting on a massive double-header with the biggest World Champions and stars globally. ONE Esports is making its highly-anticipated debut. Japan is widely-considered the birthplace of martial arts with disciplines like karate, aikido, and sumo deeply rooted into the fabric of society. Why wouldn’t we want ONE Warrior Series to be part of such a historic event?”

ONE Warrior Series: Japan vs. the World will set the stage for the historic ONE: CENTURY, ONE Championship’s landmark 100th live event, which takes place at the Ryogoku Kokugikan on Sunday, October 13. The first part of ONE: CENTURY will air on TNT in the United States beginning at 11 p.m. ET.

ONE WARRIOR SERIES 8: JAPAN VS THE WORLD

Episodes of Rich Franklin’s ONE Warrior Series can be found on ONE Championship’s official YouTube channel at https://www.youtube.com/user/OneFCMMA.