Names like Bas Rutten and Kenny Florian are attached to Karate Combat, which will return to action later this month with a championship match.

Karate Combat has announced a new slate of fights to take place in the league’s secret budokan, KC-1.

Karate Combat: Evolution will take place on Saturday, September 21, with two more in 2019 and a regular schedule to be announced for 2020. Bas Rutten continues as an ambassador and commentator, veteran commentator Kenny Rice will join him.

Expanding on its first successful year of fights, which were viewed by millions of fans, Karate Combat’s new season doubles down on a love for 80’s martial arts video games and movies through its Hollywood-level productions. The league will also elevate its fighters, building off their adventures and origin stories in the real world, to make fights more engaging and give fans stand-alone content around their favorite karateka.

Fights are full contact in the Karate Combat Fighting Pit, at three rounds of three minutes (five rounds for title fights). Knockouts are encouraged and frequent. Karate Combat has become a favorite of the world’s best karate fighters, who enjoy the chance to fight without holding back as they have to in sports karate. Related: Replays And Video Promos For Karate Combate 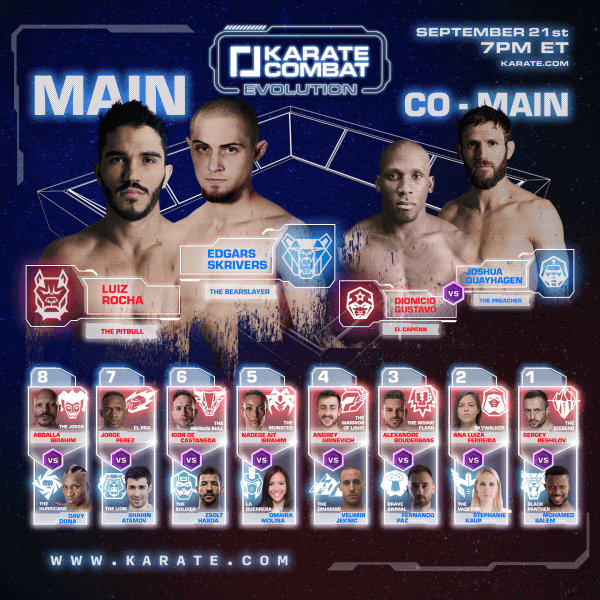 The main event at Karate Combat: Evolution will be the league’s first ever title fight for the Golden Belt. Luis “Pitbull” Rocha (Brazil) faces Edgar “The Bearslayer” Skrivers (Latvia), who have a deep history with both karate and full contact fighting.

“How can you not love Karate Combat?” said Rutten, Karate Combat Ambassador and commentator. “Now we’ve taken the intense, full contact action and added even more of that Street Fighter-type, 80’s movie fun to the production at KC-1, the league’s secret budokan. And hell, we’ve still got the Pit!”