Ryan Bader and "Rampage" Jackson had words and needed to be seperated at Bellator 226, and the champ-champ's offered his side on what took place.

Ryan Bader and “Rampage” Jackson fought back in 2009, and after Bellator 226, the veteran fighters nearly threw down again. After Bader’s bout with Cheick Kongo on Saturday, the champ-champ presented his side of what kicked off the incident. 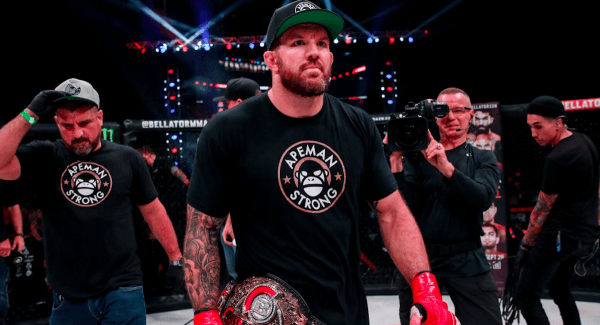 Bader and Kongo ends in a no-contest

Bader put his heavyweight title on the line against Kongo in the main event of Bellator 226. In round one, as the two battled on along the cage, Kongo complained that he had taken a thumb to the eye. The fight was ultimately declared a no-contest. It was a disappointing end to the fight, and Bader has questioned whether Kongo really did incur an eye-poke at all.

Bader and “Rampage” have to be separated

Well, after the fight was over, Jackson entered the cage and exchanged words with Bader (Jackson is a longtime friend and training partner of Kongo). Then, officials, security and corners had to separate the fighters.  So what prompted the near altercation? This is what Bader had to say about the incident after the card (quotes via MMA Junkie):

“I said, ‘Do you want this again?’ Obviously it would be a super heavyweight,” Bader said. “Sure. Why not? It would be easier than the Kongo fight.”

“I was walking out, and then there was this big fat guy there where the gate opens up,” Bader said. “And he said something like ‘You did that (expletive) on purpose,’ and whispering or whatever, and I finally got that out and I understood that. And then he was trying to fight me, and I didn’t even know what was going on.”

“He comes at me and he starts saying ‘(Expletive) you’ and all that kind of stuff, so it is what it is. (I) walked back in the middle of the cage and said, ‘Let’s go, then.’ Then he got held back by my dad, I think, and that was it.”

It seems unlikely that Bader did the eye poke on purpose. After all, this a guy who outwrestled Matt Mitrione, and it looks like that was his gameplan to defeat Kongo as well. Further, Bader also has heavy hands and has been on a pretty impressive roll.

Now, could we see Bader – Jackson 2 at some point? You never know right? Bader and Jackson are two of the biggest names on the Bellator roster, so it wouldn’t be that shocking if the promotion went that direction. Even though Jackson isn’t far removed from a decision loss to Chael Sonnen last year, and lost to Bader via decision in their 2009 fight.