The world was shocked this week as Bayley turned heel with a steel chair. Finn Balor also revealed his new look in Japan.

The biggest babyface in the WWE Universe has now turned heel, much to the surprise of fans in attendance. While the reason for the heel turn was not revealed through the story that played out in the ring, it was revealed in an interview with Charly Caruso. 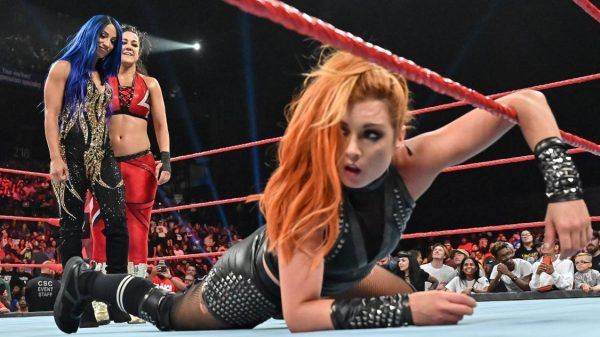 During Monday Night Raw, an interview with Charly Caruso hinted that Bayley could feel overshadowed by Becky Lynch, who is the Raw Women’s Champion. While Bayley did state that her title is just as important than the one Becky holds, it could certainly explain the heel turn.

The story of Bayley’s heel turn is bound to unfold in the weeks to come. It could lead to a feud with Becky Lynch, which is the most likely scenario at this point. However, it could also lead to a feud with Alexa Bliss and Nikki Cross, leading Bayley and Banks back to the WWE Women’s Tag Team Championships.

Many fans in attendance were surprised by the heel turn, but liked it nonetheless. After all, we all know what Bayley is capable of since NXT. However, her babyface persona never really allowed her to show her true potential. With a heel turn, Bayley could be taken more seriously in the future.

In other news, we have not heard of Finn Balor for quite a bit. As noted several weeks earlier, Finn Balor has requested some time off from the WWE. Now, we have an update of what he has been up to during his leave.

According to Finn’s social media account, he is currently spending some time in Japan. However, one thing that stood out for fans was his new look. While the beard stayed intact, Finn has lost his characteristic haircut, sporting a much shorter buzzcut.

The reaction from fans has been mixed to say the least. Some fans love the new look, while others could not resist poking a little fun at the former WWE Universal Champion.

You will fit in well pic.twitter.com/aaQmNPt57Y

There is currently no exact return date set for Finn Balor. However, we do know that a WWE superstar is not really allowed to change their appearance without permission from the WWE. After all, there is merchandise and the 2K games to take into consideration. As Finn is still under contract with the WWE, it is likely that he has received permission and that his new look will be used in the ring upon his return.

Since Finn Balor had a bit of a break, it would be smart for the company to give him a fresh start upon his return. He could actually become a serious contender for the title, instead of keeping him on the wrestler B-list. Still, we will have to see what the plans for Finn Balor are. The way things are at the WWE at the moment, I do not exactly hold my hopes up. Despite all of this, Finn Balor is a major talent that cannot be neglected for much longer.