Nate Landwehr's management has shared out a moving video of the fighter's family reacting to the news he's signed with the UFC.

M-1 Global has been sending some of its best fighters and champs to the UFC, and the most recent is the promotion’s featherweight champ, Nate Landwehr. If you need a little pick me up today, you’ll want to watch the video below, which captured Landwehr’s family reacting to the news of his UFC deal. 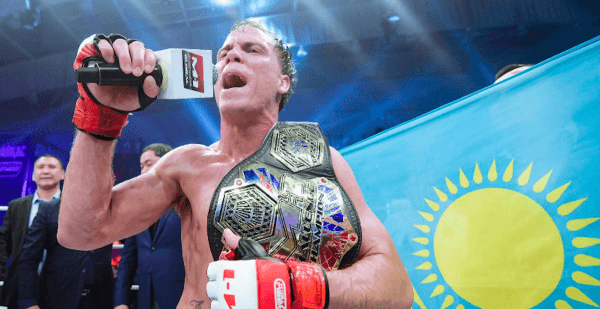 Landwehr signed with the Russia based promotion in 2017, and since then, the American’s gone 5-0 to extend his winning streak to 7. The 31-year-old fighter is coming off a decision win over Viktor Kolesnik in June. With that win, Landwehr’s overall record now stands at 13-2.

As Landwehr presented his UFC contract to his family, a camera was rolling to capture their reaction. No news yet, as to when and who Landwehr will face in his Octagon debut.

These moments. @natethetrain surprised his mother and family with his @ufc contract. It’s been a long road and Nate by far did not take the easy way… going through Russia, winning the @m1global featherweight title and defending it twice… we are here now! Congrats to Nate, Robyn and the whole family! #natethetrain #dreamscometrue 🖊

Landwehr, who made his pro debut back in 2012, joins former M-1 Challenge champs like Movar Evloev, Khadis Ibragimov and Bruno Silva in the UFC. M-1 Global has a partnership with the UFC, which opens the door for its champions to compete in the organization.