Some folks still believe that Conor McGregor could return to a title shot. But, if Khabib Nurmagomedov wins at UFC 242, it sounds like McGregor's going to have some work to do before that happens.

Conor McGregor has made it clear he hopes to fight for the UFC’s lightweight title in his Octagon return, and some people still believe that could happen. But, as Khabib Nurmagomedov gets set to defend the lightweight belt against Dustin Poirier at UFC 242, the champ says McGregor’s path to another title shot should be a lengthy one. 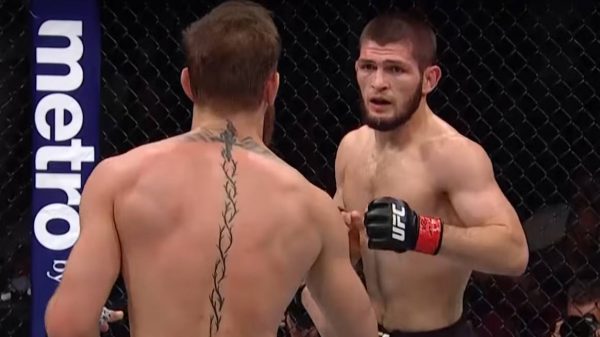 Ever since McGregor was tapped out by Nurmagomedov at UFC 229 last October, there’s been endless talk about when and who the star will fight next. Immediately after UFC 229, there were more than a few people who believed the UFC would roll with Nurmagomedov – McGregor 2. The theory being that since the first fight was so massive, all the parties would want to run it back, especially because of the ugly, post-fight brawl that occurred.

But, as time went by, it seemed like more-and-more folks called for Tony Ferguson to get the next shot. After all, Ferguson has won 12 straight, and that includes winning the interim belt. McGregor, meanwhile, hasn’t won a bout since 2016 when he stopped Eddie Alvarez.

Well, although Khabib has scoffed at the possibility of Conor getting a shot at the belt, the theory the fight could materialize hasn’t gone away. But, here’s some of what the galaxy class grappler had to say recently, about this very subject.

When asked about whether Ferguson deserves the next shot, Khabib said this (quote via MMA Junkie):

And when asked about facing McGregor for a second time, the undefeated fighter had this to say (quote via MMA Junkie):

And, in a recent interview with ESPN, Khabib said this about McGregor’s title shot prospects (quotes via MMA Junkie):

“I don’t think this fight can happen,” Nurmagomedov said. “This guy has to come back and make nine-, 10-(fight) win streak, then we’re going to fight. People who watch this interview, maybe they think, ‘Oh he thinks about this, but when UFC ask this guy to fight Conor (for) ($1) million dollars, this guy is gonna take this fight.’

“Come back and show who you are. Fight with Justin (Gaethje), fight with (Al) Iaquinta, fight with Tony (Ferguson). Fight – just show up. When (did) he win last time? Three years ago. And this guy wants to fight for the title? No, it’s not happening.”

So, ya. If Nurmagomedov beats Poirier next weekend at UFC 242, it certainly doesn’t sound like he’s going to fight McGregor. If you value meritocratic match-making, you should also be calling for Ferguson to get the next shot.