A pair of welterweights looking to climb the ladder will square off in the main event of Bellator 233 this November from Oklahoma.

The event will be broadcast live and free on Paramount Network at 9 p.m. ET/8 p.m. CT, as well as DAZN.com, while preliminary action will stream on DAZN.com, Bellator.com and globally on the Bellator Mobile App.

Tickets go on sale this Friday at 10 a.m. CT and can be purchased at the WinStar World Casino and Resort box office, as well as through Ticketmaster and Bellator.com. 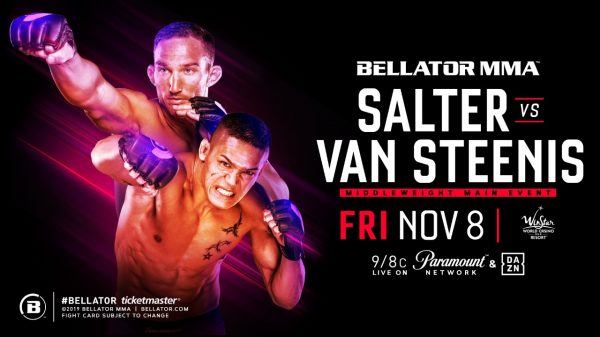 Additional bouts will be announced in the coming weeks.

Fresh off of a first-round finish of Chidi Njokuani at Bellator 210 last November, the 34-year-old Salter will enter the Bellator cage for the eighth time in his 10-year professional career on Nov. 8 in search of his seventh promotional victory. With victories in eight of his last nine contests, including seven first round-finishes, the Birmingham, Ala.-native plans to continue his impressive run through Bellator’s 185-pound class in a marquee matchup with van Steenis.

Now training in Wilmington, N.C., Salter has earned a finish in all 16 of his professional victories and looks to add another highlight reel-stoppage to his resume. A veteran of both UFC and Strikeforce, Salter also owns career wins over Kendall Grove, Jason MacDonald, Brandon Halsey and Roberto Travern.

It was at Bellator 223 in London where van Steenis handed Mike Shipman the first loss of his Bellator career, an exciting win that propelled the 27-year-old Dutch and Filipino athlete to his first Bellator main event on Nov. 8. A close training partner of Gegard Mousasi, van Steenis grew up in Spain, later earning “The Spaniard” as his nickname.

Undefeated in his four outings since signing with Bellator, van Steenis has made it clear that competing for the 185-pound title should come sooner rather than later.