Is Rey Mysterio Preparing For His Wrestling Retirement?

Rey Mysterio is still one of the most exciting high-flyers to watch, but this could come to an end. Recent rumors state that Rey might be retiring!

Rey Mysterio could be retiring from professional wrestling. The rumors started with the recent developments within the WWE, which seem to point at impending retirement for the successful high-flyer.

Rey Mysterio’s Storyline With His Son

After being unmasked by Andrade during a match, Rey Mysterio admitted that things have not been clicking recently; this during an interview with WWE’s Charly Caruso. He also mentioned it might be time to hang up the wrestling mask and make room for the new generation.

Of course, this was not the end of the interview, as Rey’s son Dominic soon joined and reminded his father about his promise to join him during his first ever match. He also prevented Rey taking of his mask in the nick of time. A great storyline for sure, but it does leave people wondering if Rey could be quitting wrestling really soon.

Fan speculation has been rampant in terms of Rey’s retirement, especially as he mentioned about his injuries. It is expected that Rey will fight alongside his son and that he will help his son’s career for a little while. However, it is also expected that Rey will retire as soon as his son has established himself on the WWE roster.

How Long Will Rey Remain On The Roster? 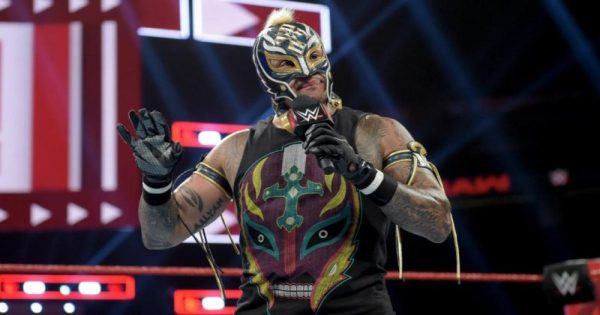 Being a lifelong fan of Rey Mysterio myself, I will be sad to see Rey Mysterio leave if he does decide to retire. After all, some of my favorite wrestling moments of all time include the high-flyer.

With seeing Rey Mysterio wrestle the way he does, it is difficult to imagine Rey retiring. Yes, he is not as young as he used to be, but still wrestles better than other wrestlers of a similar age; this is why it is difficult for me to accept that Mysterio could leave the squared circle soon.

I do not expect Rey Mysterio to retire immediately though. After all, I think he has a couple of years left on his career. I do believe his role within the WWE will diminish over the next couple of years, which at the same time could leave a spot for his son Dominic.

Speaking of Dominic, it seems he is getting accustomed to being in front of the WWE camera. While I cannot such much in terms of wrestling skill yet, I have high expectations considering he is the son of Rey Mysterio, my favorite wrestler of all time. Still, since I am not completely bias, I may be a little more lenient.